Last Monday (1st August) I celebrated Lammas. This year I made gingerbread again, using my favourite recipe from the brown sugar packet. I've finally got the new cooker installed now; I wanted it done in time for Lammas because I knew I wanted to make gingerbread!

I see that last year I put sprinkles on top. I didn't this time but I iced them as usual (I just make up some icing with icing sugar and water). The dough was a bit dry again but I added more milk. I made gingerbread men and a couple of round biscuits with the leftover dough. It was a bit trial and error getting used to the new oven but the gingerbread came out quite nice in the end. It wasn't so gingery as other times but I'd rather have less ginger than too much! lol. I added a bit of mixed spice too. 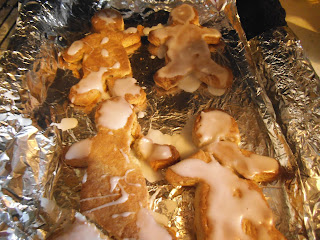 A couple of them lost a leg or head and the icing dripped a bit but never mind! lol.

I also had some Bulmer's cider and Old Jamaica ginger beer. I don't drink much, so thought I'd have some cider for a change and I also thought it was a good excuse to have some ginger beer, lol.


Hope everyone had a good Lammas and is having a great summer! :)
Posted by Moonsparkle at 13:46