For Christmas this year I made a frosted vanilla cookie cake. It was adapted from this recipe: http://www.lifeloveandsugar.com/2015/11/19/baileys-frosted-vanilla-cookie-layer-cake/

The original recipe uses Bailey's coffee creamer (Frosted Vanilla Cookie flavour). While I do like Bailey's (although I haven't had it for ages) I wasn't keen on having it in a cake and I'm also not sure if we can get that flavour coffee creamer in the UK. In the end I used some creamer from Sainsbury's. I don't have creamer often but I used it the other year when I made an iced coffee. I realised afterwards that the Bailey's creamer seems to be a powder whereas the one I got was liquid, but it worked out ok. :)

The original cake has 3 layers but I cut it down to 2 so it was less complicated! lol. The recipe uses shortening which is vegetable fat, I think. My mum suggested I use lard but the only one we had was pork fat and we decided I shouldn't use it because she made a birthday cake for my 7th birthday with lard in the icing which was horrible! lol. In the end I used Stork which I had already in the house and that worked. Shortening is sold under Trex, Flora White and Cooken here, so maybe another time I'll try one of those. Probably Flora White.

The filling is made of sugar cookie crumbs.  For Oestara 2015 made my own sugar cookie bars but I couldn't be bothered to make them on top of the cake! lol. The nearest I could find in the shops were Sainsbury's shortbread rounds (I wanted something soft and sweet). The creamer goes in the filling as well as the cake and it's also in the frosting.

I wasn't sure how the cake would come out because I substituted ingredients but it was nice. Because it only used egg whites (I think this type of cake is called a "white cake" in America, although maybe not exactly because it had all purpose flour aka plain flour, not cake flour in), it made a fluffier, lighter sponge. I cut up some biscuits and put them on top of the cake with sprinkles.


Here are a couple of pictures:


Also here's a picture of my Christmas tree: 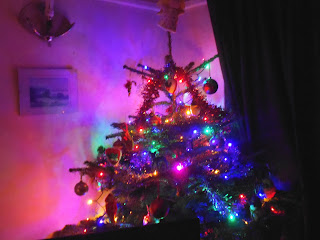 Then for New Year's Day yesterday I made some red velvet cupcakes. It was a ready made mix from Sainsbury's, I preferred that than making another cake/s from scratch, lol. The cakes came with their own vanilla buttercream but I also bought some Betty Crocker cream cheese frosting to use as well.

The cupcakes were quite nice but while the cream cheese goes well with the Betty Crocker red velvet cake mix, I think the vanilla icing suited the cupcakes better.  Here's a photo: 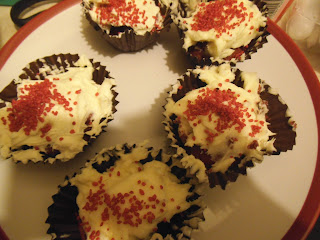 Hope everyone had a good Christmas and/or New Year! :)
Posted by Moonsparkle at 14:40