I've been into energy bites again recently. In the past couple of weeks I've made 3 lots, lol. The ones I made are based on a recipe for Chocolate Protein Bites from Butler, Party of 4. Here's the link: http://www.butlerpartyof4.com/2014/09/chocolate-protein-bites-how-i-started.html

Mine were slightly different because I didn't use protein powder or seeds, I just used what I had in the house at the time. I didn't have a lot of peanut butter so I added Nutella as well. The chocolate chips I used were Tesco's milk chocolate ones. You microwave them and they're nice to eat warm, as Danielle says in her post!

The first time they came out quite nice. I made them again a couple of days later and used peanut butter this time, but they weren't so good. I think the problem was that I didn't have enough of the wet mixture, so I added more peanut butter and Nutella and put them back in the microwave quickly which ended up overdoing them a bit. They had a really funny taste! lol.  Last Thursday I made some more and they were much better. I think they taste better with more Nutella. The first two times I halved the recipe because I wasn't sure what they would come out like but the last time I made the full one. It makes about 14.

Here's a picture of the third lot: 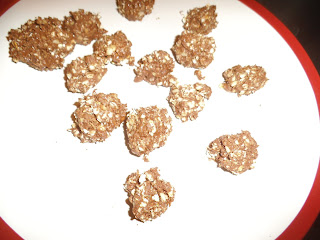 They're similar to other Nutella energy bites I made last year, except those ones had cereal in. They both taste kind of like Ferrero Rocher, although the other ones are more like it because of the crispy cereal.


Hope you enjoy these if you make them. :)

For more energy bites/balls recipes check out these posts: