Last Tuesday was Beltane and since I like to celebrate the sabbats by making food and drink, I made guacamole and had it with toasted ciabatta bread and chicken salad for lunch. As I mentioned in my Celebrating Beltane/May Day post, the recipe is from Soraya's The Kitchen Witch book and I've made it for the past 3 years.

There's a ciabatta bread recipe in The Kitchen Witch but I bought some from Tesco instead, lol. The salad is a ready made one from Tesco as well. It all went nicely together. Here's a pic: 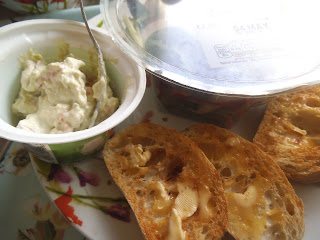 I also had Franklin and Son's Sicilian Lemonade and English Elderflower to drink. I normally have an elderflower drink, although last year I had lemonade.  This was a good combination. It had crushed juniper in as well.

I went to a local nature reserve to take some sunset pictures but there wasn't much of a sunset that night, so I didn't get many good photos. I hadn't been up there for a while though, so it was nice to go. When I got back I lit an Ocean Breeze candle that I'd lit the previous night and a white candle. Here's a picture of the white one:


Hope you had a nice Beltane! (Or Samhain if you're in the Southern Hemisphere). :) The weather has been strange lately, hot and then cold, but it's warming up again now, so feeling more like spring. Tomorrow is supposed to be hot throughout a lot of the UK. It seems weird that we're already in May! Next sabbat will be Litha aka Midsummer/the Summer Solstice and the proper start of summer. Hope you're having a lovely Bank Holiday weekend! :)