Litha aka the Summer Solstice and Midsummer) was on Friday (21st June). As I mentioned in last week's post Litha Inspiration, I normally celebrate by having salad and lemonade. I made tomato and onion salad like the past few years (the recipe is from Soraya's book The Kitchen Witch) and had some with chicken, my mum's potato salad and Doritos for lunch. I used red onion this time, like with the Kachumbari I made for Beltane. Here's a picture: 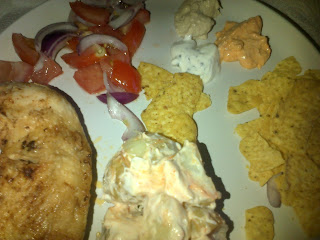 I often make "Hello Kitty lemonade" (I call it that because the recipe comes from a Hello Kitty book!) but this year I bought some for a change, Rochester lemonade presse. It was quite nice.

I also made rice pudding later, which I've done for the past couple of years after being inspired by the Llewellyn's 2017 Sabbats Almanac . I use the recipe off the back of the pudding rice packet though, because it's easier! lol. It came out a bit dry (think I didn't use enough milk or put too much rice in) and it didn't form the "skin" on the top properly. But I added more milk and it tasted nice in the end.

In the evening I went up my favourite hill and took some sunset pics: 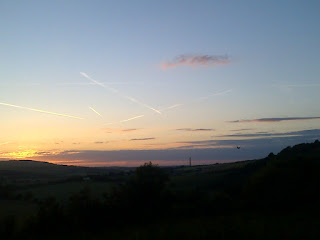 It was an area that I don't normally go to and there were some sheep up there. I took a couple of pictures, think I'll save one to share in the June update post. :)

I also lit an orange candle after sunset. Here's a photo. Sorry it's not the clearest, my camera isn't working so I took all the pictures on my phone. Normally I use a mixture of camera and mobile. The night before I lit a white candle as well but I don't have a picture of that.


Plus I watched this Summer Solstice Affirmation Meditation video from Jess Carlson: https://jesscarlson.com/summer-solstice-affirmation-meditation/


So now summer has officially started! As I said in the Litha Inspiration post, it hasn't felt much like the beginning of summer lately, with the weather being 14 degrees C (around 45 degrees F), but it did warm up to 19C (about 66F). It has been warmer these past couple of days (today's it's 24C here) and it was lovely and sunny on Litha itself. It was quite hot last year and I remember it was really hot at the end of June. Hopefully we'll get some nice weather this summer! The year seems to be going quite quickly (it doesn't feel like it's been long since spring!) and the next sabbat will be Lammas (one of my faves) at the beginning of August, which is the last summer one and the start of transitioning into autumn. But there's still the whole of summer first. :)

I'm also updating my Pinterest Seasonal board for summer: https://www.pinterest.co.uk/moonsparkle84/seasonal/


I'm planning to do another summer inspiration post this year. Hope you had a good Litha! Happy Summer! :)

And here's the Winter Section of my Various Seasons Pinterest board: https://www.pinterest.co.uk/moonsparkle84/various-seasons/winter/
Posted by Moonsparkle at 16:06