I meant to post this earlier but had computer problems. I've got my computer back now and thought I would do this post today rather than on my usual days (Sunday or Monday) because that's another week away. :)

On Monday 20th June I celebrated Litha/Midsummer by making some lemonade. In the past I've made what I call "Hello Kitty lemonade" but this year I used a recipe from The Real Witches' Kitchen book by Kate West. I didn't like it as much because it was more bitter. It's made by boiling the lemon rind with water and sugar first, then adding the lemon juice rather than just mixing lemon juice with cold water and sugar which I normally do. Never mind, it was good to try a different one. :)  I had the lemonade with some vanilla ice cream with crushed double chocolate digestives on top.

I also made a tomato and onion salad from The Kitchen Witch book by Soraya and had it with my lunch.

Here's a picture of the salad: 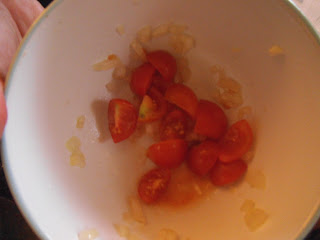 And the ice cream and biscuits: 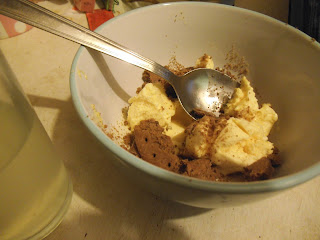 Hope everyone had a good Litha and June in general! It's feeling more like summer now with hotter, sunnier weather today. Summer is my favourite season so I hope it's going to be a good one. :)
Posted by Moonsparkle at 14:31