I'm feeling into "No-bake" recipes at the moment. A couple of weeks ago I made some Peanut Butter Energy Bites and added some Nutella. You can see them here: https://livingseasonal.blogspot.com/2016/05/peanut-butter-and-nutella-energy-bites.html

This reminded me that I'd had an actual recipe for Nutella Energy Bites saved on my Pinterest Recipes To Make board (for about a year! lol), so I had a go at making them. I used this recipe: http://www.thegunnysack.com/no-bake-energy-bites-recipe/

They came out really nice, tasted kind of like Ferrero Rocher. Probably because of the cereal which made them crunchy. (I used Rice Krispies). I think they were the nicest ones I've made so far. Here's a pic: 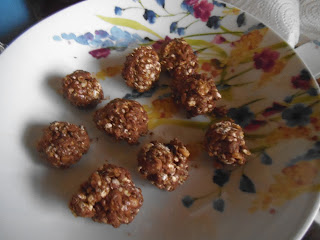 And then later in the week I made No-Bake Chocolate Oatmeal Bars (another one that I'd pinned about a year ago!). Here's the recipe: http://moneysavingmom.com/2013/06/best-ever-chocolate-oatmeal-no-bake-bars-clean-eating.html

These were also nice. I used raisins and chocolate chips and added some maple syrup and golden syrup along with the honey because I don't like honey that much. I didn't bother with the shredded coconut but might use it another time. Here's a picture of one of the bars: 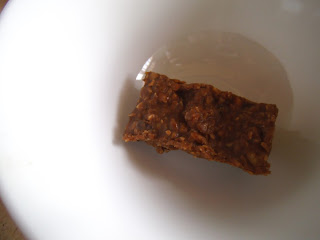 I liked them both but my favourites were the Nutella Bites and I'd definitely like to make them again. I plan to make more No-bake things in the future, so look out for more posts. :)
Posted by Moonsparkle at 19:58