For Madron last Thursday I made a ginger beer cake. It was from a recipe that I'd had saved on my Pinterest Recipes To Make board for ages, lol. (Saved it a couple of years ago). Here's the link: http://thecakedcrusader.blogspot.co.uk/2013/12/ginger-beer-cake-and-movember.html

The cake is plain but I wanted a topping so I used the cream cheese icing recipe from a James Martin cake that I made for Easter in 2013.  (Just made the icing this time). You can find that recipe here: http://www.bbcgoodfood.com/recipes/10209/frosted-white-chocolate-easter-cake

It came out quite nice but I burnt it a bit, lol. Also it was a bit dry so I ate it with Carnation evaporated milk. The recipe uses alcoholic ginger beer but I don't drink the alcoholic type, so I just used my favourite Old Jamaica Ginger. The cream cheese icing went nicely with the ginger flavour. It was better than the gingerbread cakes I made last year and the year before. I think it was because it doesn't have treacle (molasses) in it; the treacle just makes it too heavy for me.*

Here are a couple of pics: 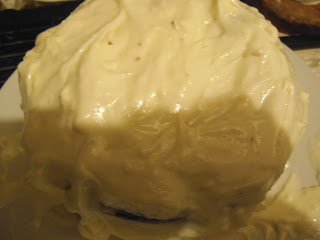 Also I mentioned recently that it was starting to feel more "autumny". Here's a picture from when I walked in the park on Friday. The leaves are just starting to turn on the trees. 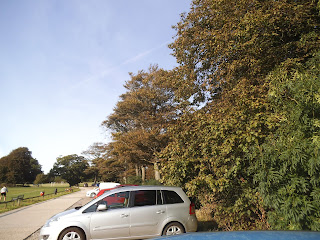 Hope everyone had a good Madron! (And for those in the Southern Hemisphere I hope you had a good Oestara (Spring Equinox). :)

The next sabbat is Samhain (also Hallowe'en) which is my favourite. (Samhain is my fave and Lammas my 2nd favourite). Between now and then the weather will get colder and we'll go properly into autumn. I like to watch the seasons changing. Happy Autumn! :)

*Update 16/9/18: While doing a Food and Mood course earlier this year I learnt that treacle and molasses aren't exactly the same thing, but they are pretty similar.
Posted by Moonsparkle at 18:46