Last year I wrote monthly updates on the blog. I enjoyed doing that but as I said in the Christmas Gingerbread + December Update post, I still want to do updates but less often. I'd prefer to do every couple of months/quarterly updates because sometimes I found it hard fitting them in along with the usual sabbat posts. So here is the update for January and February.  It's quite long (although I write long posts anyway!) since it's covering two months. :)


I tend to find January a bit of a struggle, adjusting to the new year and with Christmas over. It's often the coldest time of year too, and I don't like the cold, so that makes it harder. I try to be more optimistic though. It's not been as cold a winter as other years and we have had some nice sunny days. Here's a pic from Jan:


I didn't do many things during January but at the end of the month I went to the monthly Action for Happiness "Happy Cafe" meetup.

Then at the beginning of February I celebrated Imbolg. You can read about it here: https://livingseasonal.blogspot.com/2020/02/imbolg-2020.html

Pancake Day was on the 25th  this year, but I was unable to make any on the day since I'm having problems with my cooker. At least I'd already made some for Imbolg though! I did some baking as well, gingerbread cupcakes (packet mix).

I've been into drinking hot chocolate again, since is the season for it! I made my own several times after Christmas, most recently I made some French hot chocolate using a recipe from A Spicy Perspective: https://www.aspicyperspective.com/french-hot-chocolate-recipe/

It was quite nice, although I think my favourite is the Wellplated recipe, which I've also made again recently. Here's a pic of the version I made from the A Spicy Perspective recipe: 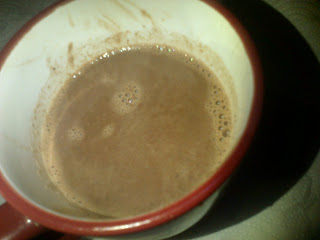 I've been struggling a bit again recently, with anxiety and various other things. Also there it's been quite a stressful time on a national and global level with Brexit finally happening (I hoped it wouldn't!) and the coronavirus, especially since there were a few cases in my area! So quite an unsettled time. We also have a Mercury Retrograde, which can affect things, or at least some believe that it does. I think that the planets and things do affect us, but it's best not to panic because then you might be too held back by the belief that something is going to go wrong. Here is a good post from Janah or Spiritually Empowered about surviving Mercury Retrograde: http://spirituallyempowered.co.uk/benefit-from-mercury-retrograde/

My regular belly dance classes which I've been attending for over 11 years) finished this month (well, in Feb, since it's now March as I'm finishing writing this), which was sad. But we will still have other events and I plan to go to other classes. I also did a "gothic fusion" workshop with Lianna Greene, where we learnt  a dance to a Lacuna Coil song! It was my first time dancing with fan veils.

Over on my other blog Falling Petals I wrote another post in the Feeling Your Emotions series, Part 1 on the subject of happiness. You can read it here: https://fallingpetalsuk.blogspot.com/2020/01/feeling-your-emotions-happiness-part-1.html

I also write most regularly on my entertainment blog Star Sparkle Blog. Some new posts in Jan and Feb have featured new music for 2020.

I also took part in Amina Makhdoom's Love Expansion programme during February. I was one of a few people chosen to get it for half price in her Facebook group Adventures with Amina!

At the end of Feb I went for afternoon tea with a Meetup group. at the Julien Plumart patisserie in Brighton. It was nice, something I'd never done before. I didn't take a picture of the food but there was a nice sunset in Churchill Square afterwards: 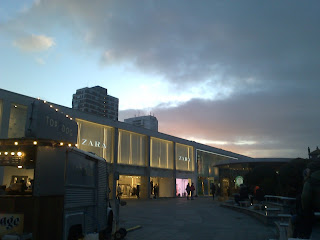 That day was also a Leap Day, since 2020 is a Leap Year. I liked this post on Penniless Pagan about celebrating the extra day: http://www.pennilesspagan.com/2020/02/how-to-celebrate-leap-day.html

My birthday is on 1st March and I was actually born a few days early. It was a Leap Year then too, so one day earlier and I would have been a Leap Year baby! I suppose if you're born on 29th February then you can choose to celebrate your birthday on either 28th Feb or 1st March when it's not a Leap year. :) 1st March is  St. David's Day, so I hope those in Wales had a good one yesterday!

This winter hasn't been as cold but the weather has been varied. Lots of wind and rain with Storms "Ciara" and "Dennis". Last year it was the warmest February on record one day, but I think this year's temperatures have been more average. It's been about 9C  (48F) in my area today.

Now that we're in March we're getting closer to spring, or we're already in spring depending how you measure it. (Meteorological spring is 1st March whereas astronomical is around the 21st). I'm looking forward to the "official start of spring which will be on 20th March this year, that's the day of Oestara/Ostara aka the Spring Equinox. I'm already seeing more signs of spring with more daffodils blooming and the days getting lighter and longer.


I'm planning to do a new Spring Inspiration post later this month, but for now here are my past posts on preparing for spring:

Getting Ready for Spring: https://livingseasonal.blogspot.com/2018/03/getting-ready-for-spring.html

And since we're in the tail end of winter and Seasonal Affective Disorder can linger into spring (and some people may get it at other times during the year, here is a post I found helpful about dealing with SAD: https://witanddelight.com/2020/01/how-to-deal-with-sad/


Read: The Tale of Murasaki by Liza Dalby (one of my faves) and Sleeper's Castle by Barbara Erskine.


Links I found useful in Jan and Feb:

Post about a different way of looking at depression: https://www.growplaybefree.com/depression-or-season-of-rest/

Jasmine Lipska video about ways to love and accept yourself:  https://www.youtube.com/watch?v=YNmGu-1gb0E&t=35s