Last Tuesday was Yule (22nd December this year) and I had a chocolate Yule log again. In previous years I've bought one from Sainsbury's. Last year I decided to make my own. It was fun but this year I decided to buy one again, lol. Since some years the Sainsbury's log has been nicer than others, I tried Tesco's Belgian chocolate log this time. I liked it but the cake was a bit dry. Here's a picture: 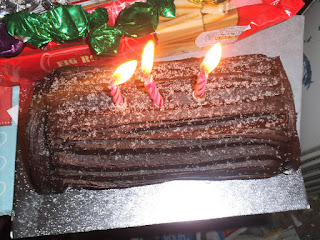 
And I made a Red Velvet Buche de Noel last Christmas, which is another type of Yule log: http://livingseasonal.blogspot.co.uk/2014/12/red-velvet-buche-de-noel.html


I also had red and green candles for Yule like past years. (And two more for Christmas).

A new thing I tried this Yule was Spicy Hot Milk, a recipe I got from The Kitchen Witch book by Soraya. It's hot milk with spices in like nutmeg, cinnamon and ginger. I like to have hot milk sometimes and it was quite nice with spices in. Here's a pic: 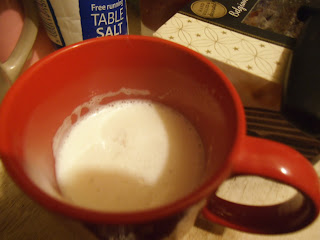 Hope you had a great Yule and Christmas! I made white chocolate fudge for Christmas which I'll do a post on later. Wishing you a Happy New Year. :)