The other week I made some no-yeast dinner rolls. Their full title is Momma's No Yeast Dinner rolls and I got them from Pinterest. Here's the link (the recipe is on the pin itself): https://uk.pinterest.com/pin/423268064969834345/

I've baked bread a couple of times before but it can be quite a complicated process! So I like no-yeast recipes because they're simpler. A few months ago I made quick dinner bread which came out quite nice. More recently I made flourless peanut butter bread. I wasn't so impressed with that; it does come out like "proper" bread but I didn't like the taste that much. I think I might have liked it more as a sweet bread. Still, it's good as an alternative bread if you're gluten intolerant because it's gluten free. :)

What I liked about these dinner rolls is the fact that they only have a few simple ingredients (flour, baking powder, milk, mayonnaise and a pinch of salt) and that they're easy to make. It doesn't say what kind of flour to use but it must have been plain because you also baking powder. The rolls tasted nice. Here's a pic: 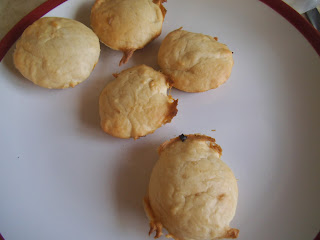 I may make these again in the future and there are some other dinner rolls I want to try. I'm also planning to bake a bread loaf for Lammas this year. Hopefully it will come out alright!


Then I made some fudgy chocolate brownies last week because I just really felt like brownies and milk, lol. The recipe had been on my Recipes To Make board for ages! You can view it here: http://www.self.com/recipe/fudgy-chocolate-brownies

I substituted some of the ingredients because I didn't have them all and preferred to use what I already had in. So they're not as healthy as the original recipe but never mind! I used ordinary plain white flour and added some golden syrup because I ran out of maple syrup. I didn't have soy milk but we had a vanilla soy drink in the house, so I used that. It was good that it was vanilla flavoured as well because I think the vanilla extract has gone off! lol. I need to get a new one. There are two types of oil in the recipe and I realised at the last moment that I'd added the vegetable one but not the other. I didn't have any other type though, so left that. I'm not sure what kind it is you're supposed to use but maybe olive?

The chocolate chips in my brownies were Tesco's milk chocolate. I was worried they would come out a bit bitter because I've made similar things in the past that have, so I added some more golden syrup and sugar. They were quite nice in the end. Maybe could have done with being a bit sweeter but they weren't bitter. I did have one with a glass of milk and another one with carnation milk! Here's a photo: 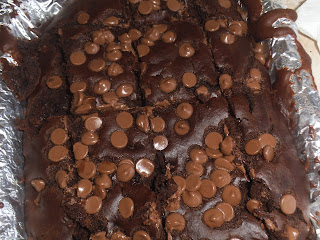 I plan to make more brownies in the future. Nutella ones are nice (I've made them several times) and I have other recipes saved on Pinterest.

Since it's Litha aka Midsummer/the Summer Solstice on Wednesday (21st June this year) I thought I'd also share some links for celebrating.* I'm going to make Hello Kitty lemonade and have it with some salad probably. Last year I made another type of lemonade but didn't like it very much. I may also make some rice pudding using a recipe from the Llewellyn's 2017 Sabbats Almanac.


First of all here's an article from Wildwood Sage about Midsummer and another one about things to do in June:

Kara who runs Wildwood and Sage mentions picking strawberries. When I was a child and teen I used to go with my family to Roundstone PYO Farm in the summer holidays. I was also just discussing with my mum yesterday how I remember having strawberries during a Father's Day celebration one year. My grandad liked strawberries. There was a man who used to come round to my grandparents' road every summer selling them.


Check out some ideas from Tess Whitehurst for celebrating:


My favourite suggestion in the first post is No. 5 (light an orange or yellow candle). And I'm going to try the free your spirit exercise in the second one.


And here are a few more links:


In the second Penniless Pagan post Michaela mentions making lemonade (which I like to do) and going to the beach. I don't have a tradition of going to the beach on Litha but that's a cool idea. I have been to the beach a few times recently. I went last night and took some pictures of the sunset. Summer is my favourite time of year so I'm looking forward to doing more summer activities. If you love summer too then check out this post from 2013: https://livingseasonal.blogspot.com/2013/07/favourite-things-about-summer.html


I'll finish off with one of the pictures I took on Lancing Beach last night. It was really hot during the day (about 29 degrees Celsius) and still warm at around 8.45 in the evening. 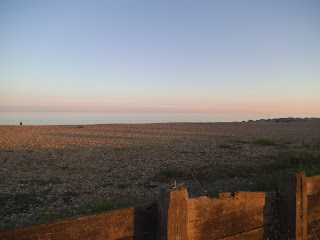 Happy Litha/ Midsummer to those celebrating in the Northern Hemisphere! And Happy Yule to those in the Southern! :)

*If you're in the Southern Hemisphere then it's your Yule aka Midwinter/the Winter Solstice. :)
Posted by Moonsparkle at 21:19