Last week I made 1 hour dinner bread. I've made bread a couple of times before in 2010, the first time it was a Bread Spell from the book Spells for the Witch in You by Marina Baker and the second time I used a recipe from a flour packet, lol. (I think we also made rolls at first school!). The first time it didn't rise but when I did it again the next day it worked. It was 31st July and I'm not sure if I had properly started celebrating Lammas then (2010 was the first time I celebrated Madron) but it was that time of year, so baking bread fit the season!

Bread making can be quite a difficult process to get the hang of but I  expect once you've done it a few times it's much easier. What I liked about the dinner bread was that it only takes about an hour to make. It's quicker because it doesn't have any yeast in it, one of the main ingredients is Greek yoghurt. I'd had the recipe on my Pinterest Recipes To Make board for 2 years, so I'm glad I finally got round to making it! lol. The recipe is from a trEAT's affair (formely Roxanna's Home Baking). Here's the link: http://atreatsaffair.com/1-hour-dinner-bread-recipe/

It's a good site; I also made her Christmas Vanilla roll cake for Christmas 2013.

I was pleased with the bread. I didn't have quite enough Greek yoghurt (I realised later that I'd got a smaller tub than the recipe said) so I wasn't sure how it would come out but it was nice. I used Clover instead of I Can't Believe It's Not Butter! because that's the spread we have in my house. And I used white bread flour instead of wholewheat/wholemeal because that's the one I had in. So it came out slightly different to Roxana's. I also dind't use sesame seeds because I wasn't bothered about having them in it. It took me longer for the prepratation part because I don't have an electric mixer, so I did it by hand and I'm a slow mixer! lol. But the baking time was 50 mintues or just under. 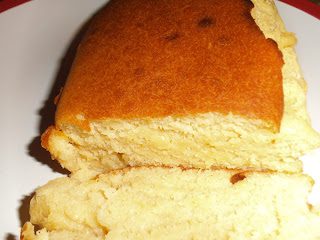 It tastes more cakey than ordinary bread, my mum thought it tasted kind of like Scotch pancakes, lol. As I said, I liked it but I think it actually tased better the next day when I had it with some chicken soup I made for lunch. Here's a picture: 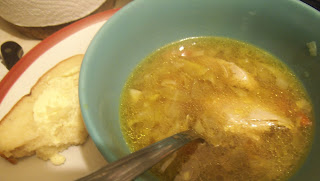 The recipe was from Closer magazine. I can't find it on their website but here's a link to a similar one:
http://www.bbc.co.uk/food/recipes/chickensoup_1918

This one had onions, chicken breasts, garlic (the recipe used garlic cloves but I used minced garlic), ginger (I used ground ginger instead of root ginger), carrots and shredded cabbage in. The recipe also used courgettes but I decided not to use them.

I like to make potato and onion soup for lunch sometimes and I've also made tomato and a couple of others but I'd never made chicken soup before. It tasted nice. I decided to make it because I've had a cold hanging round and it's supposed to help with colds. It did seem to help and I feel a bit better.

Soup is good for this time of year since we're going into winter (it will officially be winter on 21st December aka Yule/the Winter Solstice but it's already getting very cold). Here's a link to more chicken soup recipes: http://www.bbcgoodfood.com/recipes/collection/chicken-soup-0

On that note, here's a post from The Magick Kitchen (I found it on the witch Silja's Facebook page) about preparing for winter: http://themagickkitchen.com/preparing-winter-spiritual-alignment/


Of course bread also goes well with soup. After makng the dinner bread I'm inspired to make more bread in the future, so I may post about them, depending on how they turn out! :)

Hope you're keeping warm as we move into winter. :)

P.S.That's my new plate in the pics! I had a red plate since red is good for energy (a suggestion from a book by Silja) but it got broken a while ago. :( I thought this one from Tesco was all red when I saw it upside down but it turned out to be white with a red bottom. I decided to get anyway and I like it. You can see my old plate in past photos. :)
Posted by Moonsparkle at 18:57