I sometimes make potato and onion soup for lunch. I started making it about a year ago and while I did have it in the summer too,  I thought it was appropriate to post the recipe now because soup is nice to have in autumn and winter. :) I made it for lunch today. It's good if you don't have much money because there are only a couple of main ingredients (potatoes and onion). I don't have bacon on it that often, although I did today. It's also quite healthy (minus the bacon!).

This recipe is called Skint Potato & Onion Soup and it's from Sam Stern's Student Cookbook. He doesn't have that exact recipe online, so I've written it out here. He does have a similar recipe though, for Potato, Onion & Herb Soup, which you can see here: http://www.samstern.co.uk/recipe/potato-onion-herb-soup/ 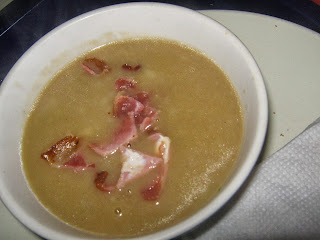 
This is similar to Sam's recipe for Potato, Onion & Herb Soup (minus the herbs), which you can find here: http://www.samstern.co.uk/recipe/potato-onion-herb-soup/

I use Chicken gravy granules or Oxo for the stock. I don't use that much milk because I don't like it too milky, so just pour in a bit. (I think that's why mine is darker than the one in the book picture). If you don't have a handblender (I don't have one anymore), you can mash or sieve it. I use a potato masher. I don't tend to use parsley.


Hope you like the recipe if you try it. :) I'll have to have a go at making the potato, onion and herb one as well.

Check out more recipes I've made here: http://www.pinterest.com/moonsparkle84/recipes-ive-made/
Posted by Moonsparkle at 18:18