Since it's Hallowe'en (also the Wiccan sabbat Samhain) this week, I thought I'd do a post about some drinks to make. One of my favourites is Demon's Blood, I got the recipe from the book The Real Witches' Kitchen by Kate West and I have made it the last 3 Hallowe'ens. I want to make it again this year. 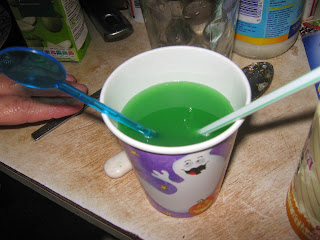 All you do is add the ingredients and  mix it together till it's turned green. You can add whatever amount of each ingredient that you want. I usually mix it in a bowl first and then sometimes add extra ginger beer to my individual drink if someone else doesn't want as much in theirs.


The first time I made this in 2010 I also made another recipe from The Real Witches' Kitchen, which was a "vampire" drink. I didn't like that much but I'll include it here because someone else might like to make it. :)


Chop the banana (if-like me- you don't like banana that much, you can just use a small amount). Blend it with the milk and ice cream and mix in the red colouring until it's turned red.

I found the recipe on Pinterest, along with this one for Fizzy Jack-o-Lantern Milkshakes: http://www.babble.com/best-recipes/fizzy-jack-o-lantern-milkshakes/ (redirects)

I can't make them all, so I might make the others next year. Hope you like the recipes if you have a go at making them. :) Happy Hallowe'en/Samhain!
Posted by Moonsparkle at 21:01