Last Wednesday it was Litha aka Midsummer/the Summer Solstice (21st June this year). As I mentioned in my Litha celebration ideas post (it was also part of a baking post) I made lemonade. I normally make it for Litha; the type I usually make is what I call "Hello Kitty lemonade" because the recipe is from a Hello Kitty book! Last year I used a recipe from The Real Witches' Kitchen book by Kate West. I didn't like that much because it was quite bitter, so this year I went back to my favourite type! lol. It's also easier to make since you don't have to boil the lemon rind or anything, you just mix the lemon juice with the water and sugar.

I had the lemonade with a salmon sandwich and sea salt crisps for lunch and also made the same tomato and onion salad that I did last year. The recipe is from The Kitchen Witch book by Soraya. Here's a picture of the lemonade: 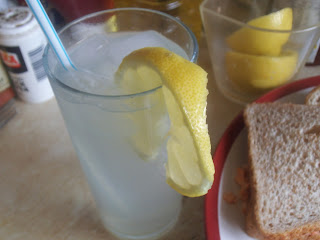 I also lit a white candle. I'd been planning to light an orange or yellow one after being inspired by a Tess Whitehurst post but didn't have time to get one beforehand.  I've read that white candles can always act as a "stand-in" for any colour so I thought I'd use a white one. I combined it with another idea of Tess' about lighting incense for the sun. In my case I lit a candle to "bless the sun". The next day I was able to get a couple of candles, yellow and orange. I lit the yellow one. Here's a pic: 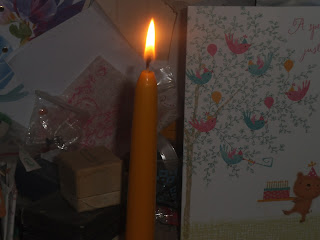 It's quite a deep yellow which looks kind of orange in this picture but it is the yellow one! I may keep the orange for Hallowe'en/Samhain but I'm not sure.

On the Thursday (22nd) I also made some rice pudding. There's a recipe for it to celebrate Litha in the  Llewellyn's Sabbats Almanac 2017. However I didn't do the exact recipe because it has gelatine in it and seemed more complicated. (I don't like complication! lol). I made the recipe off the back of the pudding rice I bought but added some vanilla which is in the recipe in the book. I also put some whipping cream in (the Llewellyn recipe uses heavy cream but I don't think we actually have that in the UK). Here's a simple rice pudding recipe similar to the one I made: http://allrecipes.co.uk/recipe/25386/good-old-fashioned-baked-rice-pudding.aspx

I've made rice pudding before (using a recipe from the Co-op magazine) and although it tastes nice it always seems to get burnt on the top! My mum says it's to do with the sugar caramelising. Anyway that's why it's a bit burnt in the photo below. It still tastes good though. :) 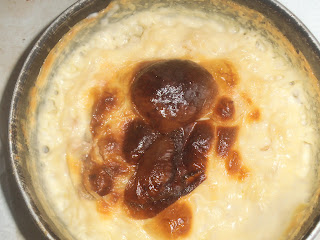 In the past year or so I've been expanding my practice of celebrating the sabbats. I still like to make food and drink (that's how I started) but I've also been incorporating other things, like lighting candles, reflecting on where I am in my life currently and doing rituals. This year I watched 3 Tess Whitehurst videos, Summer Solstice Surrender to Love, Attuning to the Magic of the Summer Solstice and Summer Solstice Affirmations. I find it helps me to shift energy by saying affirmations and even just watching the video. And I did the Free your spirit exercise from this post: https://tesswhitehurst.com/5-little-ways-to-celebrate-the-summer-solstice/


I also went for a walk in Hove Park after 9pm since it was the longest day. It was still quite warm and a lovely sunset, I took some photos. Here's one of the sunset: 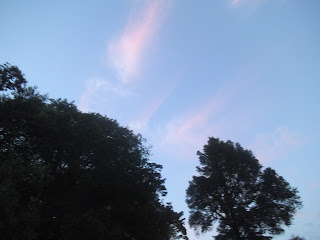 I didn't come across this post till after Litha but it applies to the whole summer, so I'll share it today: http://www.wortsandcunning.com/blog/weeds-witchcraft-healing-magickal-practices-for-summer


It's really feeling like summer now. It's been hot here in the UK; it was 29 degrees Celsius in my area recently (which is hot for here) and early 30s in other places. The past couple of days have been cooler and duller but it's brightening up this afternoon. Summer is my favourite time of year so I'm glad it's officially started now! :) The next sabbat is Lammas at the beginning of August and I'd like to make bread for that, and probably gingerbread as well.