For Hallowe'en/Samhain last Tuesday (31st Oct) I celebrated by making some food and drink. I did my usual Demon's Blood drink and the potato salad I've made the past two years (the recipe is from The Kitchen Witch book by Soraya but I did it with chives and spring onion instead of rosemary). I also made a Mexican milk drink called horchata, the recipe is from my Llewellyn Sabbats Almanac book.

I had a pumpkin, some pumpkin candles, the pumpkin container/lantern with a tealight in from other years and knitted ghost decorations. There were also orange and green candles and I lit a white one for my girl cat who died in January. (A Samhain tradition you can do is light a candle for any relatives, friends or pets that have passed away in the past year). :) Here's a picture of the pumpkin:


And this is the Demon's Blood; it's in a glow in the dark cup. It didn't seem to glow that much but never mind, lol. 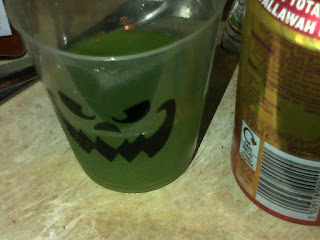 The horchata was quite  unique tasting but I did like it once I got used to it. The version I made has rice milk, almond, milk, cinnamon and a bit of lime rind in. Here are a couple of  recipes where you make it with rice rather than rice milk:


As I mentioned in my More Halloween/Samhain Celebration Ideas post I was planning to bake gingerbread. I thought about making the gingerbread skeleton I did last year but in the end went with the chocolate ginger bats from 2013. The recipe is from Tesco magazine. I don't think I have the physical one anymore but I found it online: https://realfood.tesco.com/recipes/chocolate-ginger-bat-biscuits.html


I think the biscuits were better when I made them before but I did like them. I was tired when it came to decorating them and didn't bother drawing the lines on but never mind, lol. Here's a photo. Chocolate got a bit messy, lol. 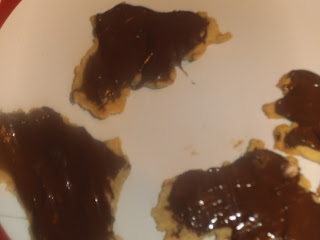 As I said in the Celebration Ideas post, I've been doing some shadow work in the lead up to Samhain. On the day I also watched this Tess Whitehurst Samhain invocation video again (it was posted last year): http://tesswhitehurst.com/a-simple-samhain-invocation/

I went up to Mill Hill, my local nature reserve and took a few sunset pics two days before. Here is one of them:


It seems weird to think that there are only two months of the year left now! It's gone colder lately and I can feel winter coming. The next sabbat will be Yule and then it will be Christmas. It's Bonfire Night here in the UK (and some other countries) tonight so I'm making some parkin, a traditional Bonfire Night recipe. I'll probably do a future post on it.

Hope you had a good Hallowe'en/Samhain! (Or Beltane depending where you are). Happy Bonfire Night! :)
Posted by Moonsparkle at 17:14