Last Monday (24th September) it was Madron, aka Mabon and the Autumn Equinox. As I mentioned in the Madron Inspiration post , I normally bake for this sabbat and this year I made some one bowl gingerbread spiced muffins. Here is the recipe: https://www.forkknifeswoon.com/one-bowl-spiced-gingerbread-muffins/

"One bowl" recipes are good because it's easier just to mix everything together! A couple of years ago I made a one bowl chocolate cake which was nice.

The gingerbread muffins were quite nice. I used applesauce instead of banana because I don't like it, but it still worked quite well. Also I used mixed spice rather than cloves and nutmeg separately. The recipe has molasses but treacle is more readily available in the UK and is similar, so it's a good substitute.

The topping is either a maple vanilla glaze or frosting (see recipe) but I decided instead to make some cream cheese/peanut butter frosting. I've used the cream cheese icing from the frosted white chocolate cake I sometimes make for Easter for ginger cakes before, and it's gone well with them. I also wanted to try out a peanut butter frosting I'd come across a while ago but thought it might not go so well with  the ginger, since it's for banana cakes. In the end I made up the frosting without the peanut butter first (also followed the James Martin white chocolate cake recipe for the British measurements), put it on 7 of the muffins and then added peanut butter to the rest and put it on the remaining 5. Here's a picture: 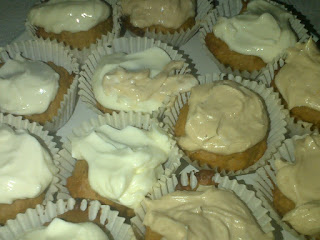 I was glad I made up the cream cheese frosting first because the peanut butter was a bit overpowering, but it made a change. :)

I also baked bread the day before. I don't make bread that often because it can be quite complicated!  But this Lammas I baked some 90 Minute Man Bread which was simple and tasted nice, so I had a go at beer bread for Madron. I chose to do it the day before because on Lammas I did both the bread and gingerbread on the same day, and it was a bit stressful, lol. Like with the Man bread, the beer bread is from Don't Waste the Crumbs. Find it here: https://dontwastethecrumbs.com/yummy-recipe-beer-bread/

I liked the bread; the beer gave it a good flavour. Here's a pic: 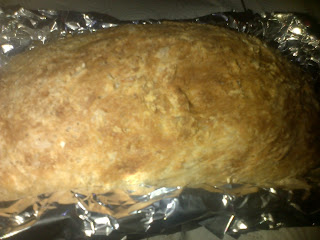 I used Bishop's Finger strong ale. The recipe doesn't use a lot, so I mixed the remaining ale with Schweppes lemonade to make a shandy! It was stronger than lager shandy which I normally have, but still nice. I had some Fentiman's ginger beer to drink as well.

I also substituted porridge oats (oatmeal) for wheat bran and it worked ok. I ate some bread warm on the day and had some for lunch on Madron with cheese and pickle and apple as a kind of Ploughman's.

In the evening I'd planned to go up to my local nature reserve and take some sunset pictures, which is something I like to do for sabbats. The weather wasn't nice though, so I went the next day. But unfortunately the road up there was blocked because they were doing work on it! (There's only one way up there). So I went to my local park instead. There wasn't much of a sunset but I took s few pics. I went back a couple of days later and it was a better one. Here are a couple of photos:

One more thing I did was watch this Tess Whitehurst Fall Equinox Affirmation Meditation video and say the affirmations: https://tesswhitehurst.com/fall-equinox-affirmation-meditation/


I hope you had a good Madron/Mabon/Autumn Equinox! (Or Oestara/Spring Equinox if you celebrated that)! :) Now we're officially in autumn and it's definitely been feeling like it these past few days, with wind and rain. Yesterday was sunny though.

I've really started to notice that it's getting dark earlier in the past couple of weeks. The next sabbat will be Samhain and then we will be properly in the "dark half "of the year".  Though I'm not a fan of short days and long nights and winter, autumn is a beautiful time of year and Samhain, which is also the modern day Hallowe'en,  is my favourite festival apart from Lammas.  So I'm looking forward to it.