Last Thursday (1st August) it was Lammas, one of my favourite sabbats. (Some people celebrate on 31st July). My main activity for this sabbat is baking and in the July Update + Lammas Inspiration post I shared some baking ideas.  I made my usual gingerbread and also had a go at making bread again this year! I don't often bake bread; the last time was Lammas 2017, although I did make a bread mix last year! The recipe I used this time is 90 Minute Man Bread from Don't Waste the Crumbs. You can find it here: https://dontwastethecrumbs.com/90-minute-man-bread/

It's called "Man Bread" because it's so easy a man can make it! No offence intended, the recipe was actually developed by "Mr Crumbs", the husband of Tiffany who runs the site, lol. :) And it only takes 90 minutes to make as you can tell by the title! It's a healthy bread recipe because it has no refined sugar and uses coconut oil instead of butter. But you can use butter or olive oil instead of coconut oil. I used butter as I did with the chocolate oatmeal bars I made in June, since I haven't bought any more coconut oil yet. I also used plain flour (what's called all-purpose in America) instead of bread flour. The recipe uses active dry yeast but I used fast action dried yeast, which means you can just add it straight to the recipe and don't need to activate it (by dissolving it in a water as in the recipe) before using. You can read about the differences between active dry, instant and fast acting yeasts here: https://www.seriouseats.com/2018/03/all-about-dry-yeast-instant-active-dry-fast-acting-and-more.html

The bread was quite nice, I was pleased with how it turned out. Here's a picture: 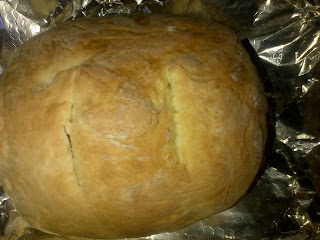 It did taste a bit sweet because of the honey. I had some just after it was baked, and then more the next day with minestrone soup for my lunch, There's a Lammas recipe for minestrone soup in the book The Kitchen Witch by Soraya, but I just bought some, lol.

I would recommend this bread because it's quite easy. The other one I was considering was No Knead overnight Artisan bread from the same site and No Knead farmhouse bread, which was also overnight, but in the end I went  with the 90 minute one. It does require kneading but it's quicker overall. The recipe mentiond a dough hook but you don't need one to make it, I don't have one.

With the gingerbread I normally use the recipe from the Tesco light brown soft sugar packet, but they've stopped putting a recipe on the packets! I listed the ingredients in  the first Lammas post I did because I couldn't copy out the whole recipe legally, so I linked to another recipe from BBC Food: https://www.bbc.co.uk/food/recipes/gingerbread_men_99096

I ended up using that one for the method. The gingerbread was nice but I think a little bit different than other times I've baked it. I cut the recipe due to having used quite a lot of flour for the bread, so I ended up making 5 "men" and 3 round shaped biscuits. I iced them with an icing made from icing sugar and water. Here's a pic of some of them:


Both the bread and gingerbread came out quite well, but I think next year I won't make both on the same day, as it was a bit stressful! Or I'd just use a bread mix, lol. I had some Bulmers cider to drink as well.

In the evening I went up to my favourite nature reserve again (I last went just before Lammas), this time at sunset and took some photos: 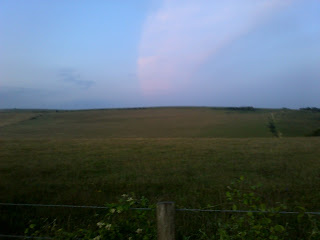 When I got back I lit an orange candle. I had also lit a white one the night before.


Hope you liked the post. :) We're now more than halfway through the year and summer will soon be on the wane. After a heatwave in July the weather has cooled down again, but hopefully we'll get some more good weather and lots of sunshine. It seems strange that we've already had the last summer sabbat and the next one (Madron/Mabon) will mark the official beginning of autumn! I feel like the year is going quickly but some months seem quite long.

Hope you had a good Lammas (or Imbolg/Imbolc) and that you enjoy the rest of your summer/winter. :)
Posted by Moonsparkle at 16:02

Email ThisBlogThis!Share to TwitterShare to FacebookShare to Pinterest
Labels: Lammas, seasonal, summer, Wheel of the Year