Last Tuesday was Lammas (1st August) and I celebrated by baking bread and gingerbread. As I mentioned in my Lammas Celebration Ideas post, I think I last baked bread 7 years ago! (Around Lammas time). I've made quick dinner bread since then and no-yeast dinner rolls. I've also made Cornish pasties some years. But this year I decided to have a go at bread again. I made it on Monday, the day before Lammas because it can take a while to rise and also I was planning to make gingerbread on Lammas itself.

It came out quite well. I used a recipe from Tesco magazine that I'd had saved for ages (I think maybe since last year). I'm pretty sure this is the recipe: https://realfood.tesco.com/recipes/fresh-white-loaf.html

It uses dried yeast which I think might make it easier than active yeast. It didn't take that long to rise compared to some recipes, you leave it for about an hour to rise and then for another half an hour to prove.

The bread tasted nice. I had some after I  made it and then more the next day with my lunch. I don't like white bread in general, especially shop bought white. I prefer brown aka wholemeal/wholewheat) but I find homemade bread a lot nicer. I remember having some at the Black Rabbit pub in Arundel once and I liked it.

I split my bread up into two because it wasn't big enough for the loaf tin. I put the second one into a round tin as well. Here's a picture of the first loaf: 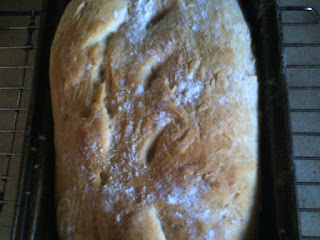 Then the next day I made gingerbread, using the recipe on the brown sugar packet. (I use Tesco Light Brown Soft Sugar). This time last year I'd only just had a new cooker installed, and wanted to make sure it was done in time for Lammas so I could make gingerbread! You can find links to both Cornish pasty and gingerbread recipes here: https://livingseasonal.blogspot.com/2014/08/lammas.html


I iced the gingerbread men with icing made up from icing sugar and water but it got a bit messy this time! lol. Here's a pic of them before they were iced: 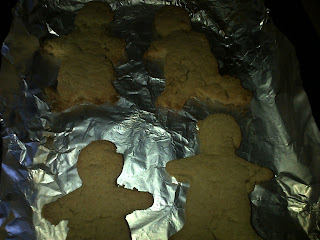 I had some Thatcher's Katy cider to drink and made up my own shandy with Wolf's Warning beer and Co-op lemonade. I didn't like the shandy that much though.

Then in the evening I went up to Mill Hill, a local nature reserve, and took some pictures. Lammas is the first harvest festival (the others are Madron and Samhain) so I thought it would be nice to go for a walk near fields. Here's a photo I took:


Sorry it's a bit grainy; I'm having trouble with my camera at the moment, so I used my phone and the quality varies. :)


Another thing I did on Lammas was light an orange candle. (I had one left over from when I bought them before Litha). Orange or yellow are good colours for this time of year because they represent the sun. Green would also be good as Tess Whitehurst suggests.

Speaking of Tess Whitehurst I also did her Lammas/Lughnasadh video affirmations (both last year's and this year's). You can check them out below:


While there's still about a month or so of summer left, it's now starting to come to an end which is kind of sad (if you like summer!). It doesn't seem that long since it was Litha! I notice the weather shifting already, the light is mellowing a bit and the sun setting around 8.40pm, around half an hour sooner than it was earlier this summer. But there's still almost the whole of August to go and it won't be officially autumn till the Autumn Equinox aka Madron, which is on 22nd September this year.

P.S. Tonight is a full moon and I'm going to have a go at making Esbat aka Full Moon Biscuits. I'm not in a coven but I thought it would be good to celebrate the full moon. There's a recipe in Kate West's book The Kitchen Witch. I may do another post soon if they come out nice!
Posted by Moonsparkle at 16:42