Last Sunday it was Yule/the Winter Solstice. As I mentioned in the Yule Inspiration post, this year I had a go at making my own Yule log. I've done it once before but mostly I buy them because that's easier, lol. That was in 2014. I also baked red velvet Buche de Noel for Christmas 2014. And I made a Christmas vanilla roll cake for Christmas last year (and previously in 2013). But it took me 5 years to make another Yule log!

This year I made a spiced Christmas Yule log using a recipe from the Co-op magazine. It has a white chocolate buttercream frosting. You can find the recipe here: https://www.coop.co.uk/recipes/spiced-christmas-yule-log

It's vegan but mine wasn't because I used butter for the icing instead of dairy free spread. You use chickpea water and it's the first time I've used that in a recipe. It didn't come out flat so I had trouble rolling it up, but I managed to roll it up a bit! I don't think it was the best Yule log I've done and could have come out better, but it tasted quite nice. Here's a picture: 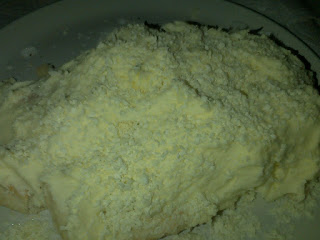 You can mostly just see the icing and it's not a proper log shape, but never mind! The sponge has cinnamon and ginger in, and the recipe has chocolate snowflakes on top, but I didn't do the snowflakes because I don't have a piping bag. It reminds me of the Christmas vanilla roll cake and I think evaporated milk would go nicely with it. I didn't have any in at the time but I got some just before Christmas which I had with the gingerbread cake I made for Christmas Day. (Will post about that next week).

I also lit red and green candles in the evening. Here's a photo: 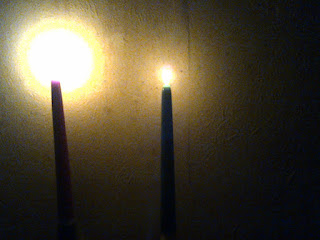 So that was the last sabbat of the calendar and the start of a new cycle/2nd sabbat on the Wheel of the Year, depending on how you follow it. Although we've officially entered winter if you go by the meteorological definition, I'm glad that the days are starting to get gradually longer now. On the day of the Winter Solstice (the 22nd) sunrise was 8.01am and 3.57pm in my area, and now it's 8.03am and 4.04pm, so the sunset is just starting to get slightly later. Sunrise will start to get earlier again next month. But I will try to enjoy winter while it's here. :) It hasn't been cold so far but in Sussex we seem to get our coldest weather in January and snow in January and February if we get any.

I also celebrated Christmas and I will do a post about that, maybe a combined one with the December update. Next up is New Year and then it will 2020 and the start of a new decade! Hope you had a good Yule/Winter Solstice (or Litha/Summer Solstice) and Christmas/other festival if you celebrated one. Wishing you a Happy New Year and happy decade ahead! :)


If you'd like some winter inspiration check out these links: