This Christmas (or rather Christmas 2018 now since we're in a new year!) I baked a Christmas vanilla roll cake, which I first made in 2013. The recipe is from a trEATS affair (formerly Roxana's Home Baking). You can find the recipe here: http://atreatsaffair.com/christmas-vanilla-roll-cake-recipe/

You roll it up like with a  chocolate Yule log or Swiss roll. (Roll cake is just another name for Swiss roll, really). I don't think the cake itself came out as nice this time, but never mind! The buttercream was nice. This time I used multicoloured sprinkles. And I ate it with Nestle Carnation topping (evaporated milk) again because it can be a bit dry. I made the roll on Christmas Eve and the topping on Christmas Day. Here's a pic: 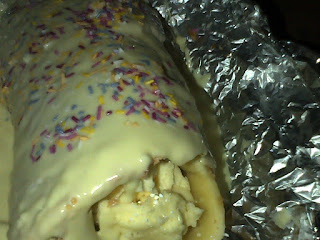 Then on New Year's Day I baked gingerbread. The recipe is from Handle the Heat: https://www.handletheheat.com/gingerbread-cookies/

I made gingerbread just before Yule too, but they didn't come out that well, too flat and large! I think it was because I had trouble mixing the butter. These were better. I substituted treacle for molasses, as it's more readily available in the UK. I also used golden syrup to make them a bit lighter. Here's a photo:


I did ice them with a simple icing provided in the recipe (icing sugar, milk and a bit of vanilla extract) but they never come out as neat as I would like! I usually make icing with water, but the milk makes it thicker which was good.


I hope everyone had a good Christmas and New Year, or other festival/s if you celebrated something else. :) I find this a bit of a bleak time of year really, with all the celebration over and cold weather. Took down the Christmas decorations yesterday because it was Twelfth Night (depending how you work out the 12 days of Christmas). But since Yule/the Winter Solstice the light is returning and the days are gradually getting longer. Next sabbat is Imbolg/Imbolc  on 2nd February, which is when the light will be increasing and we'll be moving towards spring. The weather wasn't that cold over Christmas but it's been colder the last few days. I've seen a few daffodils though! (Last year I saw some in January too but I think they were killed off when it snowed).


Since we still have most of winter to go you might enjoy this Winter Round-up + Inspiration post: https://livingseasonal.blogspot.com/2018/12/winter-round-up-inspiration.html

I'm thinking of dong monthly posts on here, just a quick round-up of the month and season so I'll see how that goes. Wishing you a lovely year ahead! :)
Posted by Moonsparkle at 19:06