I'm into hot chocolate and cocoa at the moment! It's especially good to have during winter evenings. My favourite at the moment is Bournville cocoa but I also recently got some Cadbury's drinking chocolate. The other night I made crock pot hot chocolate, using a recipe from the blog Nashville Wife: http://www.nashvillewife.com/2017/01/crock-pot-hot-chocolate-recipe.html

I don't have a crock pot or a slow cooker but my mum suggested I use a Pyrex dish on top of a saucepan of water (I put the chocolate mix in the dish and covered it with foil, then put it on top of the pan) and it worked. A couple years or so ago I made white hot chocolate which was meant to be done in a slow cooker but I just did it in the pan with no covering and I think it could have come our better. Maybe I should try it again using the method I used for this hot chocolate.

This one came out nice. It uses whipping cream and condensed milk, so had a rich, creamier taste and was thicker than ordinary hot chocolate. Here's a pic: 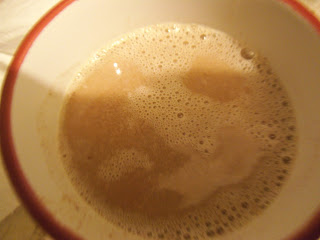 It takes a couple of hours but it's worth it. :)

If you're into a hot chocolate here's a post I did in 2014 about Sam's Stern's hot chocolate (I also made his chocolate milkshake but that didn't come out so well!): http://livingseasonal.blogspot.co.uk/2014/09/chocolate-drinks.html

Hope you're keeping warm if it's cold where you are! :)