Last weekend it was Lammas (Sunday 1st August, although some people may celebrate on 31st July or 2nd Aug). As I mentioned in the Lammas Round-up post, I baked my usual gingerbread this year and also bread.

I used the BBC Food recipe for the gingerbread, which I've used for the past couple of years (since they stopped putting a recipe on the back of the Tesco light brown soft sugar packet!). You can see it here: https://www.bbc.co.uk/food/recipes/gingerbread_men_99096

At the last minute I couldn't find the medium sized gingerbread cutter, so I ended up making mini gingerbread men/people and some round ones! I iced them as usual. Here's a pic:

The bread I baked was no knead overnight Artisan bread. The recipe is from Don't Waste the Crumbs: https://dontwastethecrumbs.com/no-knead-overnight-artisan-bread/

I actually made this last Lammas and it didn't rise! I ended up buying a bread mix, lol. However, this year it worked! You can see a picture below: 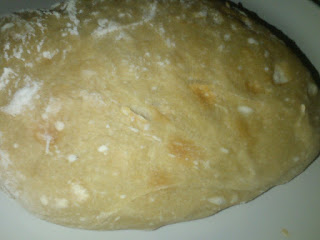 I made up the dough the night before Lammas because it needs 8 to 18 hours to rise. I used active dry yeast (it doesn't seem as easily available in my area for some reason) and activated it , but the first lot of yeast wasn't looking right. I think I had put too much water in with it. The second lot worked fine. I wouldn't call this the easier bread to make (at least not for me, others say it is!) but it did come out quite nice. I had some with butter and more with my lunch the next day.

I also had some cider to drink, Thatcher's Gold this year.

In the evening I went up to my local nature reserve on a hill at sunset. We had a mini heatwave earlier in July, but the end of July and beginning of August were colder and rainy. It was quite nice on Lammas though, the weather cleared up. Here's a photo:

When I got back, I lit an orange candle (I found some coloured candles in a local shop, so got extra in for other sabbats). Here's a pic: 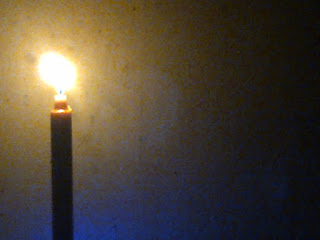 So now we're in August and the middle of the summer. It seems to have gone quickly! I'm already noticing signs of the shift towards autumn, with sunrise and sunset getting later and the light looking different. As i said, it's been quite cold lately but I think it's meant to be getting hotter again later this month. Hopefully we will get some nice summer weather before it starts properly moving into autumn.

The next sabbat will be Madron/Mabon aka the Autumn Equinox and then autumn will officially start. I will probably do a round-up post for that.