I normally post on Sundays or Mondays but I had computer problems recently, so I'm posting today instead. :)

Last Monday was Oestara aka the Spring Equinox. I celebrated by making sugar cookie bars. As I mentioned in my Oestara/Spring Equinox Celebration Ideas post I first made them in 2015 and while I liked them, I think they could have come out better. This time I used a different recipe from Sally's Baking Addiction (I pinned to it my Recipes To Make board on Pinterest a while ago). Here's the link: http://sallysbakingaddiction.com/2014/04/08/frosted-sugar-cookie-bars/

I did like them but I was a bit disappointed again. They seem to come out more like cake but maybe they are meant to be thicker. Never mind!


I'd originally intended to dye all the buttercream but I was in a bit of a rush that day because I had a belly dance workshop and I ended up forgetting to put the food colouring in! lol. So I used some plain buttercream and then put the colouring in when I got back. I used green and yellow for spring colours. I also put Cadbury Mini Eggs on top. Here's a picture from before I put the Mini Eggs on (I forgot about them too at first!): 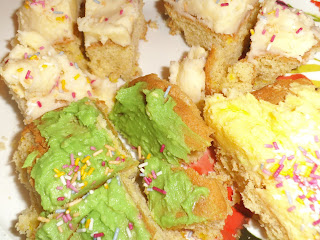 I think the buttercream icing was the best part. The sprinkles are "coloured strands" that I bought from Tesco recently.


The day before Oestara I went for a walk on a hill at a local nature reserve. I hadn't been up there all winter and not for a while before, I don't think. I'd planned to take some sunset pictures but there wasn't a proper sunset that evening. I saw some rabbits (very appropriate since they are a symbol of this time of year!) and a fox.

As I said before, you can really tell a difference now with the days getting longer and the nights shorter (in the Northern Hemisphere). The days feel lighter and less oppressive to me. Also the clocks went forward on Sunday so now it's getting dark around 7pm (an hour later than before). It has been warmer in my area, although still a bit chilly sometimes at night.  And there are lots of daffodils out. Here's a photo I took at the park yesterday: 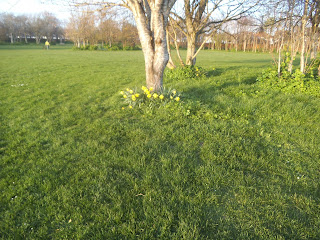 I'm looking forward to Easter now. I'm not sure what I'm making yet but I'll decide soon and do a post on here afterwards. :)


Happy Oestra and Spring! (And Happy Madron and Autumn to those in the Southern Hemisphere!). :)
Posted by Moonsparkle at 17:15