Here are a couple of things I've made recently. :)

Last weekend I made some 2 ingredient chocolate fudge for my belly dance group BD4U's hafla (dance party). (Well, I made it on Friday for the hafla on Sat). I've made it before and it wasn't that nice but this was better! It's very simple, just chocolate and condensed milk mixed together and done in the microwave, then put in the fridge to set. I used this recipe: http://www.mommykatandkids.com/2013/06/easiest-ever-two-ingredient-chocolate-fudge-recipe.html

It uses chocolate chips but I realised I didn't have enough, so I also used some Tesco milk chocolate I already had in. It was nice. Here's a pic. I'd cut a piece out, so that's why there's a space! lol. 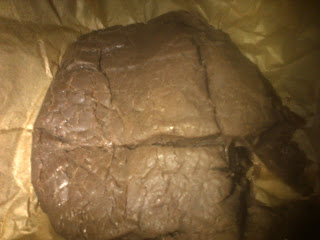 I'd recommended it if you like chocolate fudge and want something easy to make. :) There's also a 3 ingredient one with vanilla extract in that I'd like to make in the future. You could try it with white chocolate too.

Then yesterday I made some powerballs. They're another form of energy balls which I enjoy making. These one have porridge oats, peanut butter, honey and other "mix-ins" such as chocolate chips, nuts etc. Here's the recipe: https://www.cleaneatsandtreats.com/yummythings/power-balls/

It's a "clean eating" recipe but you can customise it. It's good if you want a healthy snack or if you want to add ingredients that aren't so healthy! I don't use protein powder usually and I vary the things I put in my energy balls. The oats I used are Tesco Scottish porridge oats and the peanut butter was Tesco crunchy. (It would probably work best with smooth/creamy but crunchy is fine too). I used chocolate chips for these and also some chocolate cashews that I got the other day from my local health food shop. They were a bit hard to mix in though because they're bigger. (I don't have a mixer so I did it by hand), I added golden syrup and a bit of maple syrup as well as honey. I realised afterwards I'd forgotten to put the vanilla extract and salt in but never mind! lol. I'll do that next time.

They are quite nice. Here's a picture: 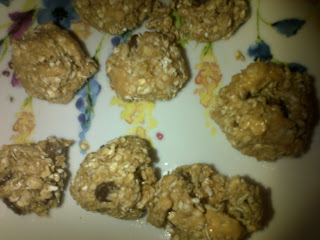 These were good for a change but I think my favourites are the chocolate and peanut butter ones. I'd also like to make the Nutella bites again. Might make them today or tomorrow actually!


If you like energy bites/balls here are some more recipes: