I normally post on Sundays or Mondays but since this year those days were New Year's Eve and New Year's Day, I'm posting today instead. :)

For Christmas I made a white chocolate Wonderland cake. The recipe is from British blogger and YouTuber Tanya Burr's book Tanya's Christmas. The recipe was featured in OK! magazine. I can't actually find the recipe online but here are a couple of other white chocolate cake ones:

The Wonderland cake has white chocolate in the sponge but not in the icing itself, that's just buttercream. I think the second recipe is a bit more similar to it than the first one. The recipe has white chocolate stars on top but I just grated some on top and added hundreds and thousands. It was quite nice, although I think it got better a couple of days later. I baked it on Christmas Eve and did the icing on Christmas Day. Here's a picture: 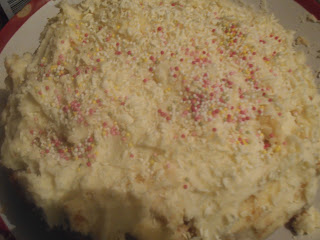 I used Asda white chocolate, it was really nice. It gave the sponge a different taste.


Then for New Year I baked some biscuits. (I'm using the British definition of biscuits). They're called filled drop cookies and the recipe is from Little House Living: https://www.littlehouseliving.com/old-fashioned-christmas-cookie-recipes.html

I cut the recipe in half because I didn't have much butter and I wasn't sure how many it would make, but it still made about 19 cookies! I did them in two lots; the first time I put raisins and Nutella in separately, and the second time I made up the raisin filling and also put some peanut butter in some of them. The raisins were Sunmaid which is what the headmistress at my first school used to give students as a reward if they'd been good! lol. Here's a pic of the first batch of cookies: 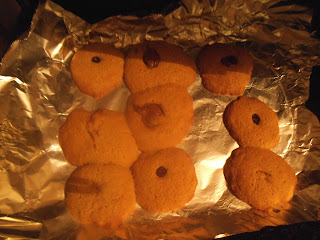 They come up quite big, so be aware when you put them in your baking tray/dish that they might get stuck together if they're too close! I tink the first lot came out looking better than the second ones, lol.

These taste really nice. I wasn't sure what I'd think of the raisin filling but I like it. I think the single raisin ones taste best, the Nutella didn't seem to go as well with the biscuit somehow.  But altogether I'm pleased with them and recommend the recipe. :)


Hope you had a good Christmas and/or New Year! I had a nice Christmas. I struggle to adjust to the new year a bit though, after the excitement of Christmas. If you do too then you might like this post I did on my other blog about letting go of 2017 (I mention the Wheel of the Year and magic a bit in it): https://fallingpetalsuk.blogspot.co.uk/2017/12/letting-go-of-2017.html

The good thing about following the Wheel is that there's always something to celebrate! the next sabbat is Imbolg in early Feb. We've still got quite a bit of winter left to go but Imbolg will be the start of the spring coming. So if you prefer warmer weather like me, then you have that to look forward to. (If you're in the Southern Hemisphere you've just had Litha and your next sabbat will be Lammas!). Wishing everyone a wonderful 2018! :)