I've done a couple of posts on summer drinks in the past, so I thought it would be good to do one on winter drinks. :)

Summer is my favourite season and I love iced coffee (and drink it year round!) but hot drinks are good too. Winter will last for a couple of months or so yet and then the nights still tend to be chilly during spring, so these drinks will also be nice for early spring. (I do still like them in summer if it's not too hot).

As I mentioned in my post on getting ready for winter, I'm not a big fan of this time of year, but I do always hope that we'll get some snow because we don't get it very often here in South East England. All we've had in my area so far was some light snow one morning that had melted by the afternoon. It has been warmer lately but colder weather and Arctic winds are on their way! Weirdly I saw some daisies in the park last week and thought I saw some daffodils today! I don't think they will last though because it's  getting cold. Daffodils normally come out around my birthday at the beginning of March, so it's really quite early for them. Anyway, here are the drinks. :)

My favourite type of cocoa currently is Cadbury's Bournville cocoa (I'm also really into the bars as well!). It's dark chocolate, so more bitter than milk choc, but with milk and sugar it can still taste quite sweet. I get mixed up between cocoa and drinking chocolate sometimes, but I think the difference is that cocoa is a powder whereas hot chocolate is made from melted chocolate that's blended with milk etc. You can read more about the difference here: https://www.thespruce.com/hot-cocoa-vs-drinking-chocolate-3971361

It does get confusing though because Cadbury's drinking chocolate which I also like, is a powder as well. Maybe it varies depending on the country? Anyway, I'll do separate entries for them here. :)

If you fancy making your own cocoa, here's a recipe: http://afiremanswife.com/2016/11/23/homemade-hot-cocoa/

It's saved on my Pinterest Recipes To Make board and I haven't got round to making it yet, but it looks good. It's made with Nesquik.

As I mention above, Cadbury's is my fave hot chocolate. I also really like Hans Sloane drinking chocolate which I discovered the other year. That is different to cocoa because it's chocolate beads that melt when you mix them with hot milk.

Starbucks do hot chocolates. I haven't tried one but it's going on my list of things to try! Here's their menu: https://www.starbucks.co.uk/menu/drinks/hot-chocolates-and-other-drinks

And so does McDonalds. I had one before Christmas as and although it wasn't as nice as others I've had, I did like it.You can find it on their McCafe menu: https://www.mcdonalds.com/gb/en-gb/menu/mccafe.html

If you'd prefer to make your own hot chocolate, here are a few recipes:

Sam Stern's recipe for hot chocolate I made in 2014: https://livingseasonal.blogspot.co.uk/2014/09/chocolate-drinks.html

Ellie from Nashville Wife's crockpot hot chocolate that I made a year ago (if you don't have a crockpot slow cooker like me, you can put the chocolate mix in a Pyrex dish on top of a saucepan or something similar): https://livingseasonal.blogspot.co.uk/2017/01/hot-chocolate.html

French hot chocolate (haven't made this but it looks good, it's dark chocolate): https://www.wellplated.com/french-hot-chocolate/


I first made this nearly 4 years ago but it didn't come out that well for me. It was probably because I don't have a slow cooker, so just made it it the pan. If I did it again I'd probably use the method I did for the crockpot hot chocolate (see above). Here's a link to my post about it: https://livingseasonal.blogspot.co.uk/2014/03/white-hot-chocolate.html


At the weekend I made some more white hot chocolate and it came out a lot better. It was simpler for me because you don't need a slow cooker and there's no whippng cream, so it's less ingredients (just milk, white chocolate chips and vanilla essence). Find the recipe here: https://lusciousmeals.blogspot.com/2017/01/homemade-white-hot-chocolate.html* 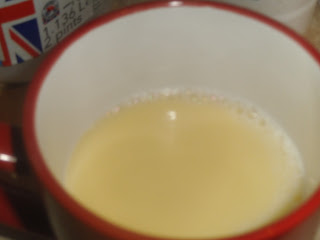 I liked this one a lot better than the one I made in 2014, although for me white hot chocolate in general can get a bit sickly, so I can't drink too much of it. It does come out yellow when I do it but still tastes nice!

I also have this strawberry white hot chocolate recipe saved on Pinterest: http://www.theorganicdietitian.com/strawberry-white-hot-chocolate/

I haven't made it so can't say what it's like, but if I do make it I'll probaly use ordinary milk rather than coconut. If you can't have dairy you might like to try this one. :)

Coffee or tea are good year round and you've got the option of having them both hot or iced. (I prefer coffee).

If you're a coffee fan too, McDonald's have spiced cookie lattes and toffee lattes on their winter menu. They also have hot chocolate. I tried the spiced cookie latte before Christmas and really liked it. (the Christmas cups with the penguin and foxes etc. on were cute!). I had the hot chocolate as well (see above). You can find the lattes on on the McCafe menu: https://www.mcdonalds.com/gb/en-gb/menu/mccafe.html

Another thing I like is hot milk which is probably one of the simplest thing to make. You can do it in eithe  a pan or the microwave (I expect people use slow cookers as well) but I use the microwave most often and add some sugar. Spicy hot milk (which I made one Yule) is a nice twist. Here's a link to my post about it: https://livingseasonal.blogspot.co.uk/2015/12/yule-2015.html

Hope you enjoyed the post and you're keeping warm! :) Wht are your favourite hot drinks?


If it's summer where you are, check out these summer drink posts: