It was Imbolg (aka Imbolc) on Friday (2nd February) and as I mentioned in my Imbolg Celebration Ideas post I made pancakes (English pancakes, also known as crepes). This year I used a recipe from BBC Good Food and they came out really nice. I was happier with them than last years'! lol. Here's the recipe: https://www.bbcgoodfood.com/recipes/2907669/easy-pancakes

The only different thing to what I normally use was vegetable oil in the batter. (You can use sunflower or vegetable oil). They had a nice taste and texture, I ate them with lemon and sugar and had Ben Shaw's cloudy lemonade to drink. I'd like to make them again for Pancake Day on 13th Feb. Here's a picture: 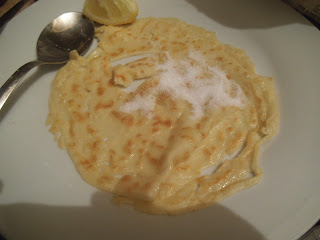 Another thing I did was light a white candle, since Imbolg is also Candlemas and the light is growing stronger. An idea from Tess Whitehurst was to light any partly burnt candles you had. I had a Christmas Magic Yankee one to use that was a Christmas present, so I lit that in the lead-up to Imbolg and also lit my Season of Peace's Yankee candle on "Imbolg Eve" aka 1st February. (Technically Imbolg starts at sunset on the 1st and carries through to the 2nd). Here's a photo of my white candle:

Also yesterday I made soda bread using an Imbolg/Imbolc recipe from The Kitchen Witch by Soraya. Although Imbolg was over I think the energy was still around. :) I'd never made soda bread but thought I'd have a go and it came out quite well. As I've said before I don't bake bread often because It can be a bit of a hassle, lol. But I did make some this past Lammas. Soda bread is easier because it doesn't need any yeast, the main ingredients are flour (the type wasn't specified but I assumed plain because we're also using bicarb, though the James Martin BBC Food recipe below uses both plain and self-raising), bicarbonate of soda and cream of tartar. It was quite nice, although does taste different to "ordinary" bread. I can't post the exact recipe on here (because of copyright laws) but here's a few similar ones:

https://www.easypeasyfoodie.com/no-buttermilk-soda-bread-vegan-dairy-free/ (without buttermilk and vegan)

The average soda bread recipe seems to use buttermilk, but The Kitchen Witch recipe uses normal milk. The 2nd link (River Cottage) has milk, yoghurt or water as alternatives. Also a couple of the recipes use both wholemeal and plain flour. You can also make your own buttermilk using milk and white vinegar. You can find a recipe here (at the bottom of the chocolate cake recipe): https://www.sixsistersstuff.com/recipe/2013/06/one-bowl-chocolate-cake-made-from-scratch/ (I access this site in Google Chrome, due to having problems in Firefox).

I've made both the cake and the buttermilk. :)

Finally last night I made some hot milk, adapting a Yule recipe from Soraya's book for hot spicy milk. I made the original recipe for Yule 2015. I added mixed spice (cinnamon, coriander and nutmeg etc.) and sugar and it tasted good.


So now we're moving out of winter, although it's still cold and we're set to have some bad weather here in the UK. I have seen signs of spring though (daffodils and snowdrops). I did take some pictures of the daffodils in Hove Park last week but it was getting dark and they didn't come out well on my phone, so you can't see much. They're just starting to come up. I'll go back later and take some more. Here's another photo of the sunset from that day (last day of Jan): 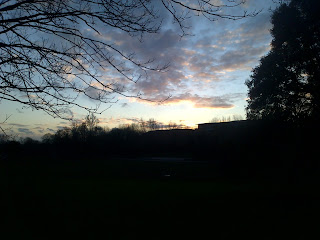 I find January quite a difficult month after the excitement of Christmas and with the cold weather, so I'm glad to have moved into February and nearer spring. Next sabbat will be Oestara/the Spring Equinox (in the Northern Hemisphere, next up in the Southern is Madron/the Autumn Equinox) which is on 20th March this year. But while we're still in February you might enjoy this post and video about the energies of this month: http://www.drmarypritchard.com/emergence/


Hope you had a good Imbolg! (Or Lammas, depending on your location). :)
Posted by Moonsparkle at 22:36