We've now come to the end of summer and are moving into autumn (in the Northern Hemisphere). Summer is my favourite season so I've tried to enjoy it this year. (I have anxiety and that often gets in the way of things). I enjoyed some summer drinks this year, including iced coffee and Costa Coffee's new Mint Choc Chip Frostino.

We had some lovely weather at the beginning of the summer here in the UK, then quite a lot of rain. But it got hotter again recently. These last few days it's been feeling more like autumn though! We've had Lammas and the next sabbat will be Madron, which I'm thinking of baking Bara brith for.

Last year I had car problems so didn't get to the beach much, but this year I've been several times. I thought I'd share some pictures I took at Shoreham and Worthing beaches recently. :)

Also in my Lammas post last month I mentioned I was planning to make Full Moon/Esbat biscuits, using a recipe from Kate West's book The Real Witches' Kitchen. They're called Esbat biscuits because an Esbat is a monthly celebration based around the moon (most often the full moon but sometimes the new moon as well), similar to the seasonal sabbats. Wiccans and pagans in covens get together at this time and celebrate. I'm not in a coven but since I like to celebrate the sabbats I thought it would be good to have a go at making Esbat biscuits. Witches use them as past of the Rite of Wine and Cakes (or Cakes and Ale) but you can just bake them and eat them, like I did!

I made them last month and they were quite nice and easy to make. Since there's another full moon coming up in a couple of days I decided to post about them today.

They're quite simple to make because they only have caster sugar, butter and plain flour in. You make some dough and roll it out like with gingerbread. Here is the recipe for the Simple Esbat Biscuits which I baked: https://www.tapatalk.com/groups/solitarywitch/esbat-biscuits-cookies-to-make-with-children-t307.html


Here's a pic of mine. I cut them into both crescent and fuller moon shapes and sprinkled sugar on the top. 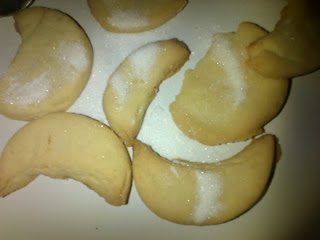 I hope you like the biscuits if you decide to make them. Happy Full Moon! :)