It's time for the May/June update!  You can read the other updates (each covering two months) at the links below:*
Jan/Feb: https://livingseasonal.blogspot.com/2020/03/januaryfebruary-update.html
March/April (+ Baking Inspiration): https://livingseasonal.blogspot.com/2020/05/marchapril-update-baking-inspiration.html
May started with Beltane on the 1st. (Although some people celebrate on 30th April). You can read my post about celebrating here: https://livingseasonal.blogspot.com/2020/05/beltane-2020.html
Back in March we went into lockdown in the UK due to the coronavirus and this continued into May. So, there's not really much to report, I just went out for food shopping/essentials a couple of times a week, lol. In the past when I've been really depressed, I haven't gone out much, but in recent years I've been doing more things, so I've had to adjust that. (I do realise it would be more of a big change for some people).
We had some nice weather and sunny days and beautiful flowers blooming. Here's a picture I took while out one day: 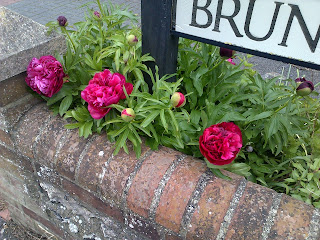 During May lockdown began to ease slightly (in England specifically) and we were allowed unlimited exercise. Since then I've been to the park a few times.
I did some baking, a chocolate loaf cake and some brownies. The chocolate loaf cake was nice. The recipe is from Apply To Face Blog and you can see it here: https://applytofaceblog.com/chocolate-loaf-cake/
Here's a photo of my loaf cake: 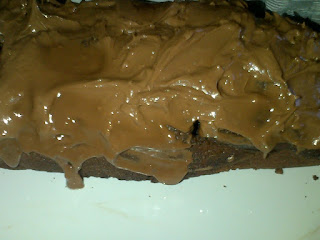 It doesn't look that neat but never mind, lol. It tasted good!
The brownies were Best Ever Chewy Brownies from Handle the Heat and Black Bean Brownies from Don't Waste The Crumbs. With the first lot I wanted to make some brownies, but I needed a recipe without baking powder because I couldn't get any at the time. I also wanted some with cocoa powder in and not just chocolate because I didn't have much spare chocolate. I thought these Best Easy Brownies from Handle the Heat and Easy Chocolate Brownies from Apply To Face blog also looked nice, but they required more chocolate so I'll save them for another time!
Tess from Handle the Heat has several brownie recipes on her site and the chewy brownies use baking soda (bicarbonate of soda or bicarb as it's called in the UK and Australia too, I see) which I did have. Here's the link: https://www.handletheheat.com/chewy-brownies/
I left out the cornstarch (cornflour) since I don't think it's essential (it affects the texture). I also used chocolate I had in the house because I didn't have any chocolate chips, and have still been trying to avoid going out too much. They were nice. The pictures didn't come out that great though, so I won't post any.
Here's a link for the black brownies recipe: https://dontwastethecrumbs.com/black-bean-brownies/
They were a bit different to "regular" brownies because they don't have any flour or sugar in, and they do have porridge oats in. The recipe uses coconut oil but since I don't have any at the moment, I used butter instead. I've been having to leave vanilla extract out of recipes because I've been having trouble getting hold of it since lockdown started. But I was able to get some recently and used it for these. I didn't like them as much as the chewy brownies, but they were good to have for a change.
I did also get some baking powder last week which I was pleased about. If you don't have baking powder you can actually substitute baking soda/bicarbonate of soda with cream of tartar. I discovered this after I needed it, but I do have some cream of tartar so will keep it in mind for future baking if needed! You can see a list of frugal substitutions on Little House Living: https://www.littlehouseliving.com/frugal-easy-cooking-substitution-solutions.html
On 20th June it was Litha/the Summer Solstice. You can read my post about celebrating here: https://livingseasonal.blogspot.com/2020/06/litha-2020.html
In June some lockdown restrictions were eased further and more places began to open (in England in particular). I was pleased that McDonald's opened! lol. I didn't feel too bad when lockdown began but it started to wear on me the further we got into it. I wanted the "normal" way of life back.
The first half of this year has been difficult, with the coronavirus and worldwide lockdowns/quarantines, then the racist murder of George Floyd by a police officer in Minnesota. This sparked protests across the US and in other countries, including the UK and discussion about racism towards black people in particular. It's all been a sad and scary time and the racial division especially gets me to me as a mixed race (black and white) person. But I hope that change will come out of this and things will be better in future. I wrote a little more about it and about lockdown in my Mid-2020 Reflections post over on my other blog Falling Petals. You can read it here if you like: https://fallingpetalsuk.blogspot.com/2020/06/mid-2020-reflections.html
Now we're into summer (my favourite season) and I hope that the rest of 2020 is better than the first half! Hope everyone is doing ok. :) Thanks if you read all the way to the end! How was your May and June?

Read: Nothing new because libraries have been closed since March! (They are opening up now though!!). I re-read my own books such as The Woman in White by Wilkie Collins, What Katy Did by Susan Coolidge and the sequel What Katy Did At School.
Played: I played my favourite TR game Tomb Raider: The Angel of Darkness on PS2 again.
Current Favourite Songs: I wrote a post about this on my entertainment blog Star Sparkle Blog. Read it here: https://starsparklex.blogspot.com/2020/05/current-favourite-songs.html
Links I found useful in May and June:
High Vibes Turbulent Support Guide from The Chic Life: https://thechiclife.com/2020/03/high-vibe-turbulent-times-support-guide.html  (also enjoyed looking through the site in general).
Discovered Dominique of Brown and Bendy's YouTube channel (she talks about the Law of Attraction): https://www.youtube.com/channel/UCnKgWhQ7CmF_5cWGDK5qmCg
Also Leeor Alexandra posted some good videos over on her channel, in particular Come Back Home to Yourself: https://www.youtube.com/watch?v=t2-TUitNdVY
Post about making lists to stay organised and happy: https://hellomalavika.com/2020/05/01/the-lists-i-make-to-stay-organized-happy
Post about living more mindfully when you're at home more from Michelle of Daisy Butter: https://daisybutter.com/2020/06/living-mindfully-when-youre-at-home-more-often
12 Ways to Live a More Magically Focused Year (appplicable any time): https://witchcraftedlife.com/12-ways-to-live-a-more-magickally-focused-year/
*Not sure what to call them since they're less often than monthly and more often than quarterly!
Posted by Moonsparkle at 22:16