Time for the March/April update! This year I decided to do updates every couple of months rather than monthly ones like last year, because I sometimes found it hard fitting them in with the sabbat posts.

I'm a bit later writing this because I did the Beltane 2020 post last weekend. This will be quite a long post because it's covering two months. Also at the end I've included a baking inspiration section because lots of people are baking right now! So if you're here for the baking, just scroll down. :)

These past couple of months have been hard worldwide with so many cases of the coronavirus and lots of countries introducing lockdowns/quarantines. Late Feb/early March was like the last "normal" time here in the UK (before lockdown).

March started with my birthday. I had a good day, I got some nice presents and had a red velvet cake again, like last year. Then a few days later I went to Nando's with my mum, the Brighton one this time rather than the one in Hove. I had my "usual" (although I only go about once a year! lol), chicken butterfly (plain-ish), chips and Coke. Then for a change I had frozen yoghurt for pudding (dessert) and bought some carrot cake to take home. Here's a pic of my food: 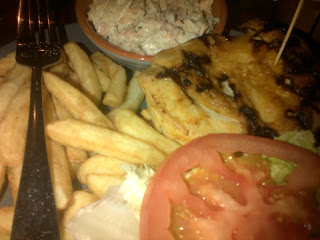 Oestara/the Spring Equinox was on 21st March. I was glad to see the official start of spring. You can see my post about it here: https://livingseasonal.blogspot.com/2020/03/oestara-2020.html

Then on 23rd March we went into lockdown here in the UK, only allowed out for necessities (food shopping and picking up medicines), if you can't work from home and for one hour of exercise a day. It has been quite a weird time, especially seeing hardly anyone around when you do go out. Here's a photo from late March (I was out to go to the chemist and the supermarket): 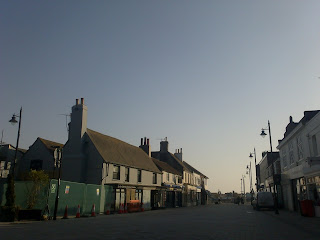 Easter was during April this year (Easter Sunday was the 12th). You can read my post about Easter here: https://livingseasonal.blogspot.com/2020/04/easter-2020.html

I did some baking which I'll write more about below (see under Baking Inspiration). During this time the weather is variable, so I've been making both hot chocolate at night and iced coffees during the day! lol. And drinking shop bought hot choc. I made some hot chocolate using a recipe from Sophie Kasaei (from Geordie Shore) from an old Closer magazine (Christmas issue!). It has Horlicks and cornflour in the recipe but I left out the cornflour because I didn't have any and it's not essential. My favourite one to make is French hot chocolate (recipe from Well Plated). You can see a pic in this post from last April's update: https://livingseasonal.blogspot.com/2019/04/april-update-beltane-inspiration.html

The closure of McDonald's meant I could no longer get my favourite iced frappes! They had also got rid of the mocha a while ago for some reason and are now only doing caramel. :( But I still like the caramel. I like to make my own iced coffees at home anyway during the warmer months (or semi warmer months, e.g. spring and summer!), so I've been making a few. But I can't get them really similar to McDonald's, lol. When I heard about Dalgona coffee (the Korean iced coffee that's inspired by the South Korean Dalgona sweet) I had to try it! I actually first heard about it on Pops in Seoul when the MC Kim ByeongKwan had a go at making it. Here's a pic of mine: 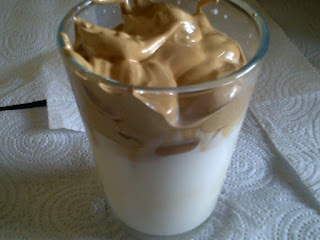 Dalgona coffee is also known as whipped coffee because you mix instant coffee, sugar and hot water together and whip it up to make a foam, then put it on top of milk. Some people say you should whip it 350-400 times and I thought, "I don't think I have the patience!", lol. I'm not sure how many times I stirred it in the end, but it worked. I didn't use a spoon like some people do, but a hand whisk. It's nice but I wouldn't make it that often because I prefer a bit less effort when making my coffee!

I used two main recipes, from Michelle of Daisy Butter which you can find by clicking here and from Kimchimari which you can find here. Michelle's is a vegan one and I'm not vegan, but I used it for the measurements and method. The Kimchimari one has more instructions plus video. Michelle also did a another post on how to make a vegan version (the original one I linked to is part of her Sundaze series): https://daisybutter.com/2020/04/how-to-make-vegan-dalgona-coffee/

One of my favourite iced coffees to make is Vietnamese style with condensed milk. Check out my More Summer Drinks post for more on that and more iced coffee links:
https://livingseasonal.blogspot.com/2017/08/more-summer-drinks-summer-tag.html

Since the coronavirus and lockdown, food staples and basic items have been hard to get, also baking stuff. Condensed milk is scarce in the shops so I ended up making my own. I'll write more about that below.

So it's been quite difficult really. But I'm grateful that we're still allowed out for food shopping/basics and exercise, since in some countries they haven't been able to do that. I have been missing McDonald's and libraries, lol.  I prefer "real" (paper) books, although of course e-books are really handy. Wimpy has still been open, which is good! I know these are trivial but it's important to acknowledge these things. There has been more talk about mental health during the lockdown, which is a good thing, but of course it's not good that more people are suffering. I have depression and anxiety and have found myself feeling more depressed during this time, also sometimes the health anxiety flares up. I don't talk much about mental health  on The Seasonal Life, but I write more about it on my other blog Falling Petals, so check that out if you'd like: https://fallingpetalsuk.blogspot.com

My belly dance classes have now finished, so they wouldn't be on anyway, but my group had a workshop/hafla (dance party) planned that had to be cancelled. Also in the past couple of years I've been going to Meetup events, so I miss doing those. But I know that it's all for the best and hopefully things will get better soon. I'm grateful to the NHS, supermarket workers and all the keyworkers who have been continuing to work. :)

During April I took part in Amina Makhdoom's 30 Day Joy Challenge which is always fun, and I've also been doing some dancing at home while taking Katie Holland's Awakened Bellydance free programme on Facebook. I post regularly on my entertainment blog Star Sparkle Blog and I haven't been too active over on Falling Petals (my spiritual/self help blog), but in March I did write the 2nd Happiness post in the Feeling Your Emotions series which you can see here:
https://fallingpetalsuk.blogspot.com/2020/03/feeling-your-emotions-happiness-part-2.html

So thank you for reading all that if you've read this far! :) How have these past couple of months been for you? How are you coping in lockdown/quarantine?

Read: Super Attractor by Gabrielle Bernstein (got this for my birthday), Crimson and Bone by Marina Fiorato, The Velvet Cloak of Moonlight by Christina Courtenay. Also been re-reading the Twilight books.

Links I found useful in March and April:

Suggestions for inviting more joy into your life: https://www.sophiecliff.com/blog/2020/3/9/negative-news-cycle-getting-you-down-read-this 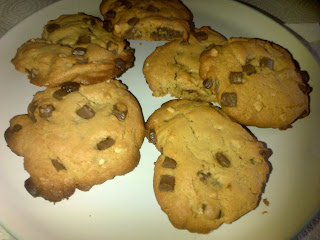 So since baking is something a lot of people have been doing during lockdown, I decided to include this section! "Stress baking" is now a thing! (On a serious note, baking can help you to feel better if you're feeling stressed or anxious, especially if it's something where you get more physical, like kneading bread). :) I like to bake anyway, so don't need much encouragement, lol.  It's been hard to get basics like flour and eggs though. The cookies pictured above are peanut butter chocolate chips ones from Handle the Heat: https://www.handletheheat.com/peanut-butter-chocolate-chip-cookies/

I baked them in early April. They came out quite wide but still tasted nice! I used Stockwell (Tesco) crunchy peanut butter and milk chocolate chunks because that was all they had at the supermarket. I couldn't get smooth peanut butter or milk chocolate chips, just dark. I ended up using dark choc chips for hot chocolate.

I also made zucchini (courgette) muffins using this recipe from Don't Waste the Crumbs: https://dontwastethecrumbs.com/zucchini-bread-muffins-apples-carrots/

They have apples and carrots in them. I liked them but they didn't rise as they should have done because I couldn't get any plain flour, so had to change the recipe slightly. I used self-raising which I already had, and left out the bicarbonate of soda (baking soda) and baking powder. I think they still could have done with an extra raising agent.

As I mentioned above, I couldn't find condensed milk, so had a go at making my own to use in Vietnamese style iced coffee. (I wasn't sure you could but you can!). The first recipe I used made it from whole milk and it came out quite well, but was "bitty" (had bits in it). I'm not sure if I caught the milk or it separated or something. I tried again with evaporated milk (Nestle Carnation) and liked that better. It was smoother and tasted really nice, so I definitely recommend that one. Although the other one was quite nice too. Here are the recipe links:

How to make it from milk (full fat or low fat): https://www.biggerbolderbaking.com/how-to-make-condensed-milk/

Now here are some baking posts on the blog. I haven't included every single post so the list isn't too long. Maybe I'll do a separate one later, also featuring seasonal bakes. :)

Coca-Cola chocolate cake (one of my fave cakes!): https://livingseasonal.blogspot.com/2014/02/coca-cola-chocolate-cake.html

One bowl chocolate cake and 7up cake: https://livingseasonal.blogspot.com/2017/07/baking-one-bowl-chocolate-cake-and-7up.html

I was going to make it today or tomorrow, but forgot the Maltesers at the supermarket! Because I'm minimising going out at the moment, I'll wait till later this upcoming week when I go shopping again.

Lots of people are baking banana bread. I won't be making that because I don't like banana, but for those who do here's a recipe:

If you've run out of yeast here are 17 recipes you can make without it: https://theeverygirl.com/breads-without-yeast/

And here are 15 eggless recipes if you've run out of eggs (or can't/don't eat them): https://www.littlehouseliving.com/eggless-recipes.html

Update 2 21/5/20: If you need to make your own buttermilk here's a simple recipe from Six Sisters. I have made this several times and it works fine. (Scroll to the bottom of the one bowl chocolate cake post): https://www.sixsistersstuff.com/recipe/one-bowl-chocolate-cake-made-from-scratch/

Hope that gave you some baking inspiration! :)