I've been doing some baking recently, so it's time for another baking post. :)

First of all I made cheese scones a couple of weekends ago. They were for my mum's birthday because she likes them. :) I personally prefer sweet scones but cheese are nice too.

The recipe is from Sam Stern's Cheese Scone Tea in his Student Cookbook.

Note: I've only copied the ingredients out because I believe that's all I'm allowed to do legally. The recipe isn't on Sam's website but you can find a similar one from All Recipes here: http://allrecipes.co.uk/recipe/36349/rich-cheese-scones.aspx

There is one online for Sam's sweet scones in a Yorkshire Cream Tea: http://www.samstern.co.uk/recipe/yorkshire-cream-tea/


And here's another one from BBC Food: https://www.bbc.com/food/recipes/cheesescones_1287

The BBC Food one uses self raising flour rather than plain white flour and baking powder, which are in the Sam recipe.


The recipe I made has Cheddar cheese in but I used half Red Leicester and half Canadian Cheddar. They came out quite nice. Here's a picture:

Then yesterday I baked brownies. I thought about making the 3 ingredient Nutella ones I've made before, but at the time the computer was in the shop and I only have the recipe online, so I decided to do a Sam Stern one instead. It's also from the Student Cookbook, his Brownie Basic recipe. In the end I got the computer back earlier than I thought but went ahead and made that recipe, but with Nutella in.

Sam doesn't have that recipe on his site either (although he does have one for Salted Caramel Cheesecake Brownies)  but here's a similar recipe from Jamie Oliver: http://www.jamieshomecookingskills.com/recipe.php?title=chocolate-brownies

With the one I used you melt the chocolate and milk or cold coffee in a bowl of simmering water (or use the microwave like I did) and the butter is beaten with the sugar and then added to the egg and dry ingredients, so it's a bit different to Jamie's where you melt the butter with the chocolate.

Here's another recipe from BBC Good Food as well: https://www.bbcgoodfood.com/recipes/1912/saffrons-brownies

It has an optional chocolate topping; sounds good! The recipes requires a lot of eggs though (6), whereas the one I made needs one large egg and I used a medium one, which worked ok. These ones are gooey.


As well as the Nutella, I put some Hans Sloane milk and dark drinking chocolate beads (the recipe uses plain chocolate) in my brownies. You can put milk or cold coffee in the mix, I used coffee. I wasn't sure what they'd come out like with the Nutella/Hans Sloane mix but they were yummy, nice flavour and chewy texture, but not too chewy. Here's a pic: 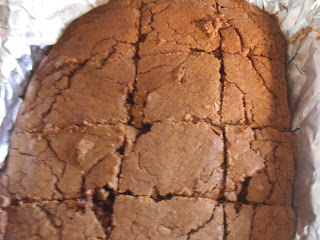 Hope you enjoy the scones and brownies if you make them :)

Birdies Perch Malteser slice (one of my favourite things to make!): https://livingseasonal.blogspot.com/2013/09/birdies-perch-malteser-slice.html

Potato and onion soup (often make this for lunch): https://livingseasonal.blogspot.com/2013/10/potato-and-onion-soup.html