Time for the July/August update! You can read the other updates at the links below:

In July we were still in lockdown but things were easing up. More places opened up and coronavirus cases had gone down overall. But in certain areas they had spiked, so some local lockdowns were introduced. From 24th July face coverings were made mandatory in shops and supermarkets in England. (They were already mandatory on public transport.)

Libraries in Sussex opened for "Select and Collect" which I was pleased about! It was good to be able to get some new books.
We got a new family car which made it easier to get to places, especially since public transport has been more difficult during lockdown.
At the end of July, I went to Lancing Beach for the first time in ages which was good. Here are a couple of photos: 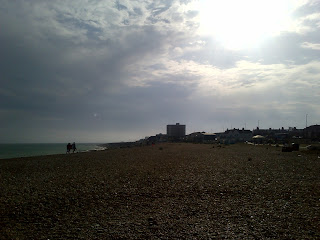 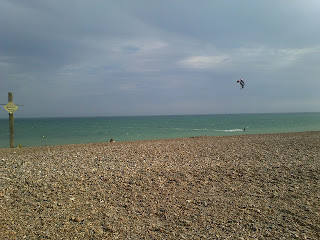 At the beginning of August, it was Lammas. You can read about my celebrations here: https://livingseasonal.blogspot.com/2020/08/lammas-2020.html
I've been getting back into regular park walks which has been nice. Here's a photo from Hove Park: 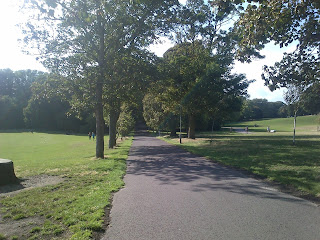 In August I went to Starbucks and had a mocha frappuccino. I hadn't had one for a long time. (I'm still missing McDonald's iced frappes though!) I also got an ice cream from Number 24, which used to be Macaris.
And at the end of the month I went to Five Guys (first time I'd ever been) and had a cheeseburger meal with Coke and a coffee milkshake. I liked the food and the milkshake was expensive, but worth it! Here's a couple of pictures I took when I went to the Five Guys at Brighton Marina: 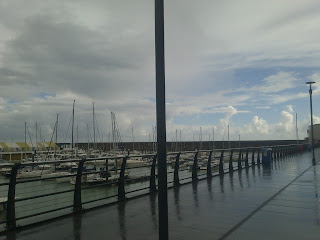 While we had hot weather in June, July was cooler. In early August we had a heatwave with the 7th being the hottest August day for 17 years. It was 36-38C  (96.8F-100.4F) in some places. Here on the coast we were a bit cooler, about 32C (about 89F). More recently we had a lot of wind due to Storm Francis and wind speeds broke August records in parts of England and Wales. I remember it was really windy last August as well!
I felt July and August were an improvement on May and June, although this summer has been different to previous ones. My mood has been a bit better.
Now it's September and it will be autumn soon. It seems strange that it's already September, but in some ways the year has felt long. Madron/the Autumn Equinox is coming up this month (for those of us in the Northern Hemisphere). I'm planning to do a celebration post soon. It will mark the official start of autumn. Once we get to September the rest of the year seems to pass quickly. I'm always sad to see summer go but I like autumn too. :)
Hope you had a good summer! (Or winter). :)

Read: What Katy Did Next by Susan Coolidge (the sequels to What Katy Did and What Katy Did At School; the edition I have is the last 2 books in 1 volume),  Happy Ever After trilogy by Adele Geras (one of my favourites).

Also libraries re-opened so I read some new books! A House of Ghosts by W.C. Ryan, The Glovemaker by Ann Weisgarber and The Deathless Girls by Kiran Millwood Hargrave. Bought a couple of non-fiction books as well, Manifest Now by Idil Ahmed and Manifest Like Bliss by Jasmine Lipska (Law of Attraction).

Saw: Scary Stories to Tell in the Dark (a year after it came out, it took ages to come on Sky!), The Secrets She Keeps, The Deceived.

Played: Re-played Tomb Raider: Legend on PS2 (been playing on and off).

Links I found useful in July and August:
Post on Blessing Manifesting on celebrating your personal accomplishments:
https://www.blessingmanifesting.com/celebrate-your-personal-accomplishments/
Post about creating your own light when feeling depressed:  https://bellarosablog.com/motivation-monday-create-your-own-light/

Leeor Alexandra video about freeing yourself by changing your mindset:  https://www.youtube.com/watch?v=b9kMRsY68Xw

I also took part in a free Overcome Your Manifestation Blocks challenge run by Diana of The Chic Life, which was fun. Check out her site here: https://thechiclife.com/

P.S. If you'd like some inspiration for the upcoming autumn, check out these posts from 2018 and 2019 about getting ready for autumn. The 2nd post also has some photos from last summer:

Getting Ready for Autumn: https://livingseasonal.blogspot.com/2018/09/getting-ready-for-autumn.html